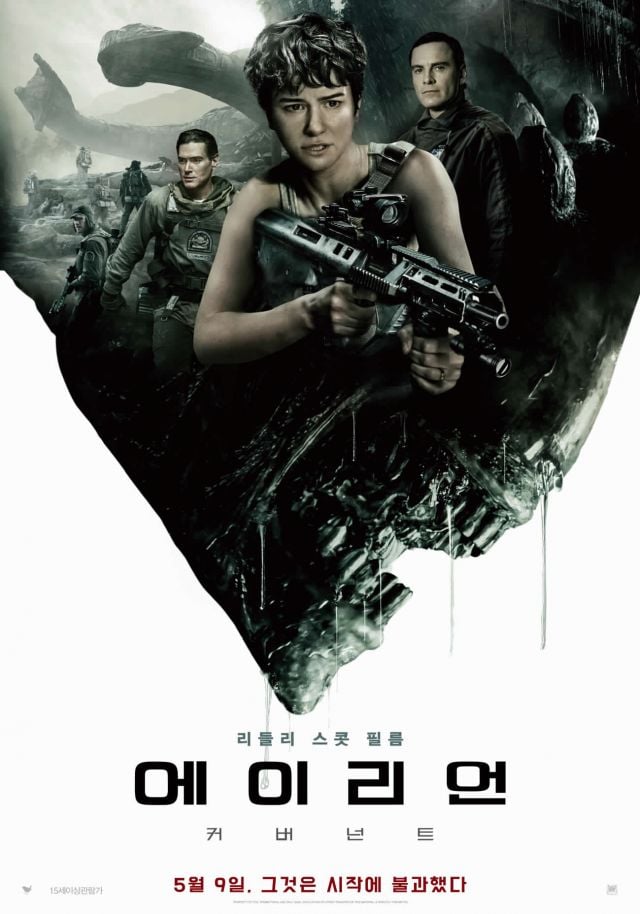 Starring Michael Fassbender, Katherine Waterston, Billy Crudup, Danny McBride and Demián Bichir, "Alien: Covenant"-Ridley Scott's sequel to the 2012 sci-fi horror "Prometheus"-arrived in Korea on Tuesday to 832 screens around the country. The film, the sixth in the "Alien" series, claimed 520,635 admissions (25.79%) during its first weekend out to secure the top spot, outplaying last weekend's top two films, "The Sheriff In Town" and "Guardians of the Galaxy Vol. 2".

Last weekend, with over a thousand screens, Kim Hyeong-joo-II's 115-minute directorial and screenwriting debut, "The Sheriff In Town" (starring Lee Sung-min, Cho Jin-woong, and Kim Sung-kyun), arrived and captured 25.91% of the box office pie (837,429 admissions). Week two for Kim's comedy drama saw that figure drop to 422,692 (20.62%), bringing its bottom line now to $15.8 million (2.2 million admissions). Still, "The Sheriff In Town" was once again the highest local film, with other local features making up the other 10% that went to local films as foreign features grabbed close to 70% of the weekend action.

Directed by Jeong Sik ("Epitaph") and Kim Hwi, "The Tooth and the Nail" is a dark drama based on Bill S. Ballinger's 1955 novel of the same name and stars Go Soo and Kim Joo-hyuk. The film attracted the attention of 7.2% of the filmgoing public, 148,992 admissions, and was followed in sixth by the Japanese animation "A Silent Voice: The Move" by Naoko Yamada. "A Silent Voice" (based on the manga of the same name) has already grossed just over $19.5 million since being released in its home country late last year; its first weekend out in Korea yielded 94,132 admissions (4.41%).

Guy Ritchie's "King Arthur: Legend of the Sword" (starring Charlie Hunnam) was the only other new arrival to make it into the top ten this week. Since Friday, Richie's rendition earned $365,113 (46,714 admissions) for seventh. A local king occupied eight; Moon Hyeon-seong's "The King's Case Note (starring Lee Sun-kyun and Ahn Jae-hong) has been out since April 26, and with the 34,835 admissions it claimed over this past weekend, the film moves its total earnings to $11.07 million (1.6 million).

The final two places went to the eight installments in the "Fast and the Furious" series of films, "Fate of the Furious", and Sony Pictures Animation's "Smurfs: The Lost Village" by director Kelly Asbury; they claimed 17,139 (0.84%) and 13.619 (0.59%) admissions respectively.