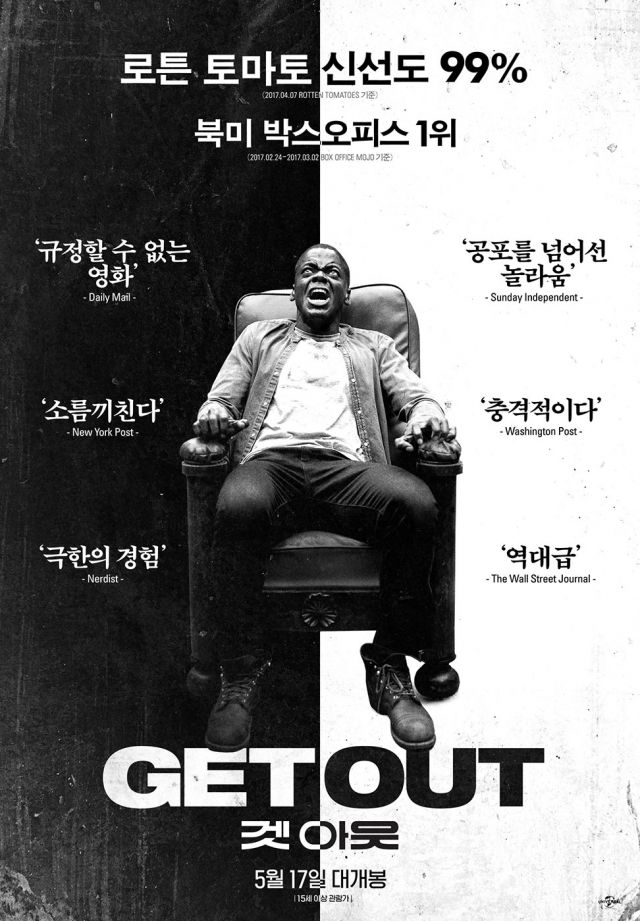 Jordan Peele's "Get Out" (starring Daniel Kaluuya, Allison Williams and Lil Rel Howery) arrived last Wednesday to 945 screens around the country. The American horror, which had its premiere at the Sundance Film Festival back in January, claimed pole position with 802,981 admissions (39.01%), dislodging last weekend's top film, "Alien: Covenant". The critically acclaimed "Get Out" is also the American actor and comedian's directorial debut.

Second and third places fell to two new arrives. "The Merciless", Byun Sung-Hyun's third film after "The Beat Goes on" (2010) and "Whatcha Wearin'?" (2012), grabbed 18.39% of the sales (376,712 admissions) from 869 screens, followed by the foreign fantasy epic "King Arthur: Legend of the Sword" by Guy Ritchie. "King Arthur" received negative reviews in America and the UK and has thus far only recouped $93.4 million of the $175 million of its production costs. In Korea, the film claimed 209,578 admissions (10.06%) from 588 screens during its first weekend out. The weekend's top three films-"Get Out", "The Merciless", and "King Arthur"-all of which were officially released last week, captured 67.4% of the box office pie.

For the past three weeks, and amid a flurry of new releases, DreamWorks Animation's "The Boss Baby" (Alec Baldwin) has remained steady in third place. Released May 3, "The Boss Baby" opened its account with 764,648 admissions, and with the 193,756 (8.81%) it claimed over the weekend, "The Boss Baby"'s bottom line in South Korea now moves to 2.2 million, or $15.3 million.

Last weekend's number one, "Alien: Covenant", was up next in fifth, down three places. The latest in "Alien" series of films claimed the top spot last weekend with 524,611 admissions but fell to fifth here with 133,721 (6.52%). Since its release on May 9, Ridley Scott's "Alien: Covenant" has grossed $9.1 million in Korea alone; worldwide, Scott's sequel to "Prometheus" has now made $117.9 million.

Kim Hyeong-joo-II's comedy-drama "The Sheriff In Town" (Lee Sung-min, Cho Jin-woong, Kim Sung-kyun), his first film as director and scriptwriter, fell to sixth place after successfully occupying second place for the past two weeks. From 604 screens, down from 758, "The Sheriff In Town" grabbed 133,586 admissions (6.3%) moving its totally tally to 2.5 million ($18.1 million).

"Guardians of the Galaxy Vol. 2" started strong in Korea three weekends ago, but like so many films that are hitting Korea's circuit during this highly competitive time of year, it found it difficult to retain its success. The latest "Guardians of the Galaxy" film fell three places to seventh with 129,652 (6.21%), bringing its bottom line to $20.4 million. The Japanese animation "A Silent Voice: The Movie" was up next in eighth with 30,746 admissions (1.4%), followed by Jeong Sik and Kim Hwi's thriller "The Tooth and the Nail" with 10,665 admissions (0.47%). The final spot fell to the Belgium-France co-production "Lost in Paris" by director Dominique Abel and Fiona Gordon; from just 84 screens around the country, "Lost in Paris" attracted 6,287 filmgoers ($47,268).