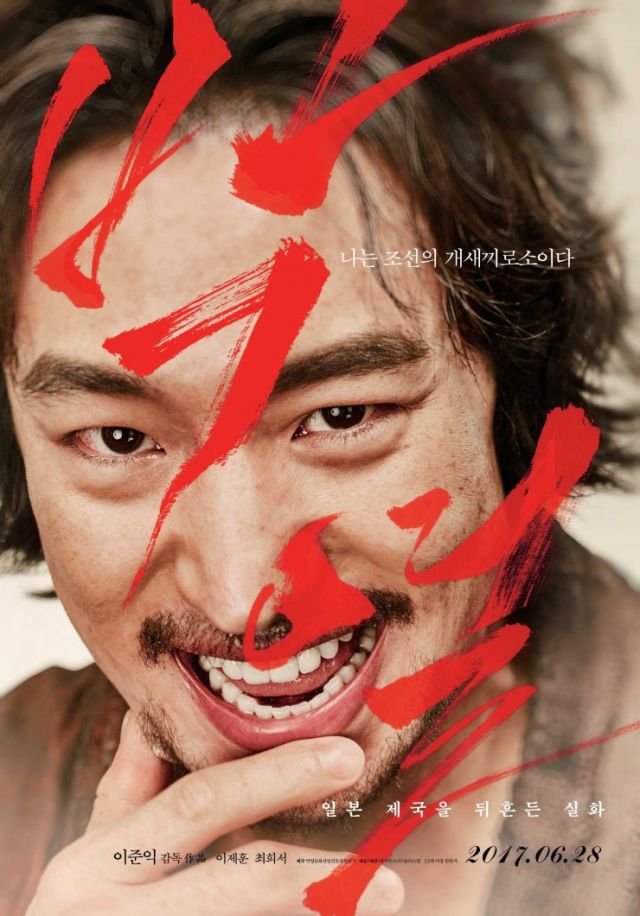 Lee Je-hoon plays colonial-era independence activist Park Yeol in Lee Joon-ik's new drama, "Anarchist from Colony". Lee's eleventh film opened at number one with 817,684 admissions (48.94%) from 1,176 screens around the country, dislodging Michael Bay's "Transformers: The Last Knight" and denying it a second weekend at the top. Park Yeol (1902-1974) was an anarchist who spent 22 years in prison for attempting to assassinate Japanese royalty, Emperor Hirohito.

Last weekend's number one, the fifth "Transformers" film, had it screens slashed from 1,727 to 893, from which it captured 21.97% of the sales. With the 355,985 admissions earned over the weekend, "The Last Knight"'s bottom line in Korea now moves to $17.4 million (2.4 million admissions); worldwide, Bay's final "Transformers" film has grossed nearly half a billion dollars.

Alex Kurtzman's re-imagining of "The Mummy" (with Tom Cruise, Annabelle Wallis, and Sofia Boutella) enjoyed two weekends at the top of the chart when it was released in early June; since then, however, "The Mummy" has given way to other summer blockbusters like "The Last Knight". In its fourth weekend out, "The Mummy" claimed 2.45% (40,562 admissions) to move its total admissions count to 3.6 million ($26.4 million); "The Mummy" is now the fourth highest-grossing film of the year between "Fast and Furious 8" (3.6 million admissions) and "Beauty and the Beast" (5.1 million admissions).

Jo Seon-ho's directorial debut "A Day - 2017" (Kim Myung-min and Byun Yo-han) fell four places and settle in sixth with 35,367 admissions (2.11%) from 425 screens (down from 666), followed by the coming-of-age American comedy "The Edge of Seventeen" starring Hailee Steinfeld and Woody Harrelson. From just 86 screens, director Kelly Fremon Craig's "The Edge of Seventeen" banked 26,358 admissions (1.62%) during its first weekend out in Korea. "The Villainess", by director Jung Byung-gil, has been in the top ten for four weeks now, and with the 19,835 admissions claimed here (1.2%), its bottom line moves to $8.4 million, or 1.1 million admissions.

The Chinese animation "Boonie Bears: Homeward Journey" and the local documentary "Our President" rounded out the weekend's top ten: the "Boonie Bears" opened its Korean account with 15,125 of the sales (0.79%), and "Our President"-which has been active in the chart since late May-added another 13,385 (0.77%). Lee Chang-jae's documentary, which followers former president Roy Moo-hyun, has now grossed a little over $12.5 million.