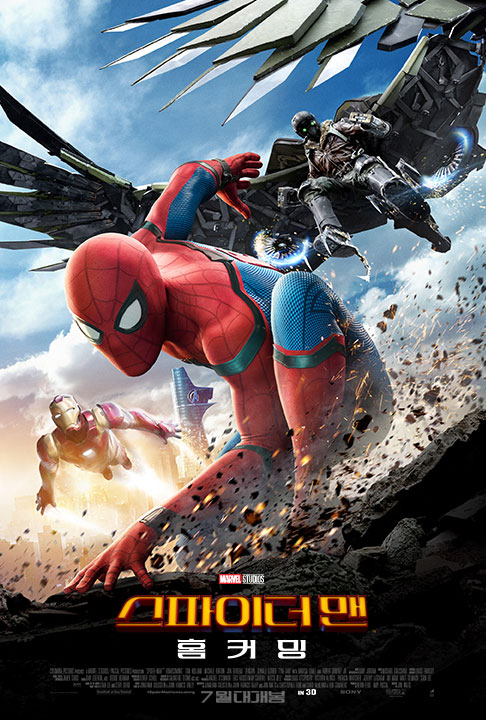 America's 'friendly neighbourhood Spider-Man' swiftly swung into pole position over the weekend by capturing 82.74% of the box office sales. "Spider-Man: Homecoming", the second movie reboot of Marvel's iconic web-slinger, scored 2.6 million admissions ($19.1 million) from a massive 1,965 screens around the country, dislodging Lee Joon-ik's "Anarchist from Colony" at the top and becoming the seventh highest grossing film of year.

Last weekend's number one, Lee's drama about anarchistic liberation fighter Park Yeol, had its screen count reduced from 1,176 to 745 during its second week out. With the 328,102 admissions (10%) Lee's tenth feature claimed over the weekend, "Anarchist from Colony"'s (starring Lee Je-hoon) total tally now moves to 1.8 million, or $12.3 million.

Three weeks ago, before the arrival of Lee's tenth feature, Michael Bay's "Transformers: The Last Knight" (reportedly Bay's final "Transformers" film) topped the chart with 1.2 million admissions (64.1%). The film is now in its third weekend out in Korea and occupied that same position over the weekend; from 401 screens, "The Last Knight" drew 69,605 admissions (2%), bringing its bottom line to $12.3 million (2.5 million admissions-currently the twelve highest grossing film of the year). Worldwide, and from a production budget of $217 million, the fifth instalment in the "Transformers" series of films has grossed $494.6 million.

Bong Joon-ho's second English-language film "Okja" (with Tilda Swinton, Paul Dano, Jake Gyllenhaal, Ahn Seo-hyun, and Steven Yeun) remained unmoved in fourth with 52,713 admissions (1.52%)-scored from just 104 screens (down from 111). Bong's latest, produced by Netflix, is at the centre of an on-going controversy over distribution rights and regulations that has resulted in the majority of local cinema chains boycotting the film. With this week's sales included, Bong's critically acclaimed fantasy has now attracted nearly a quarter of a million moviegoers (214,667 admissions: $1.4 million).

Two more foreign animations followed: the German adventure film "Richard the Stork" (which also makes a reappearance after being ejected from the top ten last weekend) and the US/UK production "Sodor's Legend of the Lost Treasure" (part of the popular British "Thomas & Friends" television series) earned 9,508 and 9,483 admissions respectively. The final place fell to Hong Sang-soo's latest drama, "The Day After - 2017" starring Kwon Hae-hyo. The film-which was part of the Official Selection at Cannes 2017-entered the fray last Thursday to 166 local screens and opened its account here with 6,750 admissions ($47,349).