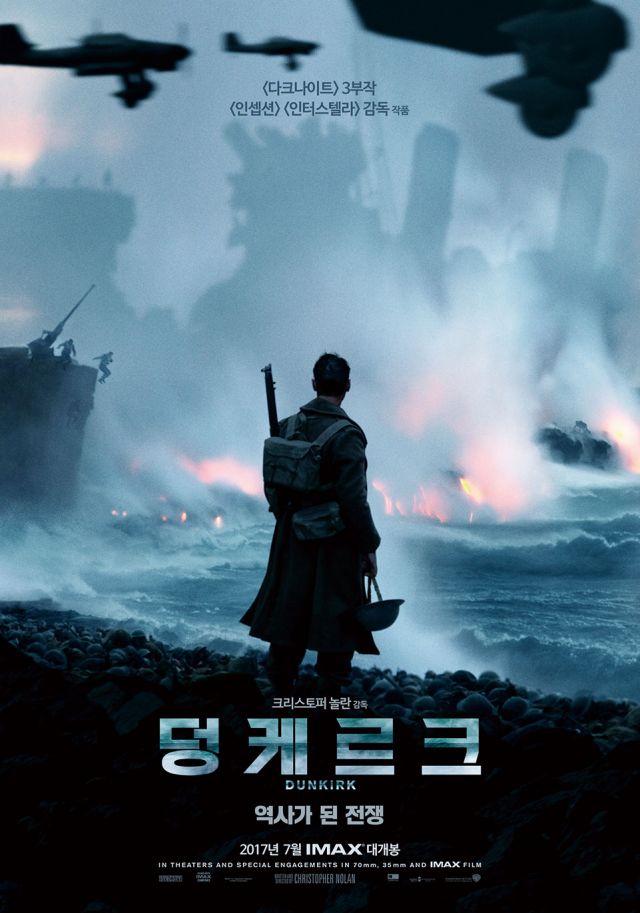 Christopher Nolan's critically acclaimed "Dunkirk" was released in Korea last Thursday and comfortably came out on top over the weekend. Many are already heralding it as one of the best war films ever and arguably Nolan's best. The film was shot on IMAX 65mm and is the first feature film to use IMAX cameras as hand-held cameras. From 1,245 screens, Nolan's epic depiction of "the Miracle of Dunkirk" sold 1.1 million admissions (46.53%), or $8.75 million. Its successful arrival meant "Spider-Man: Homecoming" was unable to claim a third straight weekend at the top.

"Spider-Man: Homecoming" had its screen count cut in half during its third weekend out but still managed to bank another $3.97 million (21.12%). With those 533,440 admissions, the film's total gross in Korea swelled to just over $50 million and stands as the second highest-grossing film of the year behind "Confidential Assignment" ($56.99 million). Worldwide, "Homecoming" has grossed over half a billion.

The British survival horror flick "47 Meters Down" by director Johannes Roberts arrived just ahead of "Dunkirk" and claimed 301,086 admissions (11.95%) from 733 screens. In the film, Roberts' tenth, two sisters get trapped in a shark cage while diving with great whites in Mexico and have to find a way to survive the ordeal. Masakazu Hashimoto anime "Crayon Shin-chan: Invasion!! Alien Shiriri" opened its Korean account with 128,439 (4.61%), followed by the third instalment in Pixar and Disney's "Cars" series.

"Urfin Jus and His Wooden Soldiers" is a Russian 3D animation, the second in the "Magic Land" series of books by Alexander Volkov's about an alternative version of the well-known Land of Oz. The film claimed 1.58% of the sales, or 44,113 admissions ($298,170), from 342 screens. The only Korean film to feature in this weekend's chart was Lee Joon-ik's "Anarchist from Colony" starring Lee Je-hoon (as Park Yeol). Lee's eleventh film has been active in the top ten since its release late June, and with the 37,987 admissions it scored here, it's grossed $16 million (2.33 million admissions). Currently, "Anarchist from Colony" is the sixteenth highest-grossing film of the year behind Kim Tae-yoon's "New Trial" (2.4 million) and the foreign 3D animation "The Boss Baby" (2.45 million).