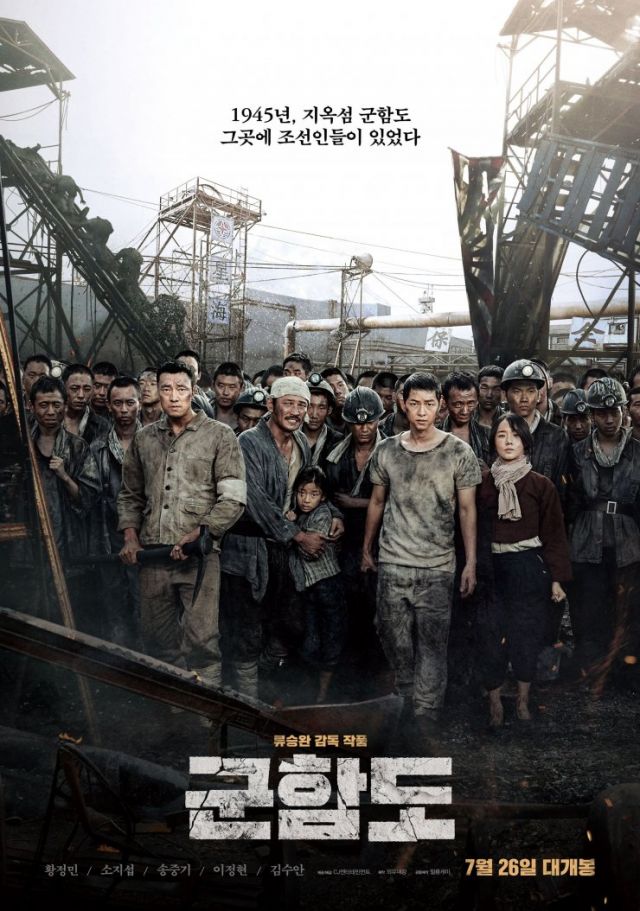 "The Battleship Island" already the fifth highest grossing film of the year...

Director Ryoo Seung-wan ("Veteran", the third highest grossing Korean film of all time) captures life inside Japan's notorious WWII labour camp on Hashima Island in his latest, record-breaking blockbuster, "The Battleship Island". Before World War II broke out in Europe, Japan was mining underwater coal on a 16-acre island southwest of the city of Nagasaki and conscripting hundreds of Koreans, among others prisons of war, to toil away in treacherous conditions. "The Battleship Island" tells the story of a few hundred gritty Koreans who risked it all to escape what is now a UNESCO World Heritage Site.

"The Battleship Island"-featuring Hwang Jung-min ("Veteran"), So Ji-sub, Song Joong-ki, Lee Jung-hyun, and the young Kim Su-an-is one of the big releases of the year and set a new opening day record by attracting just under a million admissions on Thursday. Over the weekend, and from a massive 2,019 screens, Ryoo's 132-minute historical film captured 62.82% of the sales (2.4 million admissions), or $18.4 million. That was more than enough to dislodge last week's number one, Christopher Nolan's own WWII 'escape' extravaganza, "Dunkirk".

But Nolan's latest, arguably greatest, was also outplayed during its second week out by the third instalment in the popular "Despicable Me" animated series. Universal Pictures and Illumination Entertainment's yellow minions and company attracted 850,642 admissions (20.07%) from 1,051 screens around the country, claiming second and sending "Dunkirk" down another notch after its strong start last weekend. Worldwide, and from a production budget of around $80 million, "Despicable Me 3" has grossed $813.8 million (currently the fourteenth highest grossing animation of all time behind "Inside Out" and ahead of "Shrek the Third").

"Dunkirk" had its screen count slashed almost in half from 1,245 to 657; with the 361,741 admissions (10.23%) Nolan's latest claimed here, the film's total tally in Korea now moves to 2.1 million, or $16.6 million. Marvel's "Spider-Man: Homecoming" was enjoying its second-straight weekend at the top two week's ago, but now it's in fourth in as many weeks. "Spider-Man: Homecoming" claimed 98,595 admissions (2.45%) for a new total of 7.1 million and is unlikely to acquire the 700,000 still needed to overtake "Confidential Assignment" as the highest grossing film of the year.

Masakazu Hashimoto's "Crayon Shin-chan: Invasion!! Alien Shiriri", a Japanese anime based on Yoshito Usui's popular manga series, took in just over a percent of the sales (48,046), followed by the British survival horror film "47 Meters Down" on 26,912 (0.66%). "Flipped", a re-release of the 2010 American romantic comedy with Madeline Carroll and Callan McAuliffe, moved its admission count to 328,522 ($2.3 million) with the 20,558 admissions (0.52%) it claimed here. (Rob Reiner's "Flipped" is based on Wendelin Van Draanen's award-winning young adult novel of the same name.)

"Maudie", an Irish-Canadian co-production about the life of artist Maud Lewis in Nova Scotia, moved up one place to eight with 19,825 admissions (0.39%), followed by "Cars 3", down four places with 11,944 (0.27%). With 10,963 admissions (0.25%) the final spot in this weekend's top ten went to Jon Gunn's "The Case for Christ" with Lee Strobel. Gunn's documentary drama entered the fray two weeks ago, fell away the following week, but makes a modest return here.