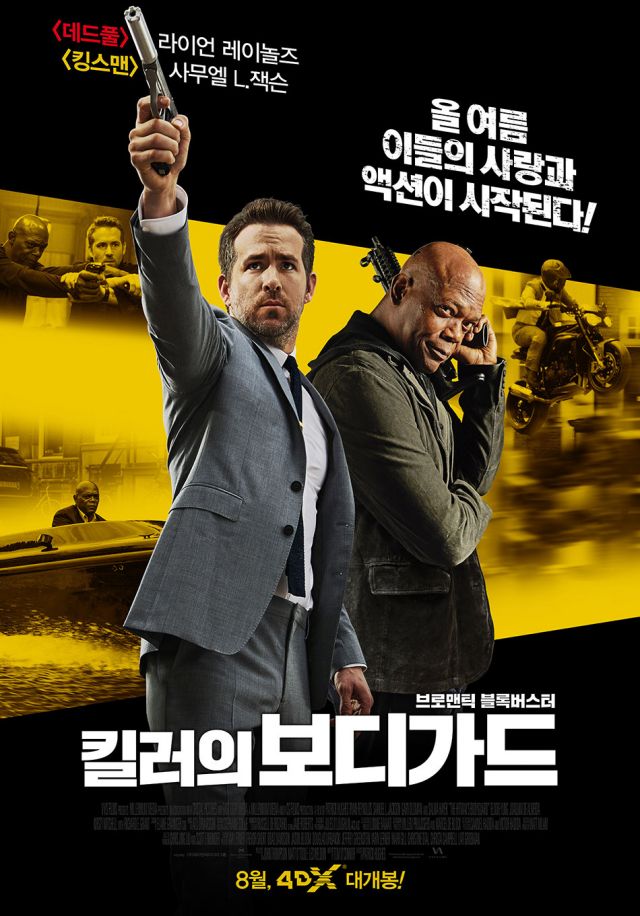 "The Hitman's Bodyguard" takes down "V.I.P" while "A Taxi Driver" backs away with millions...

Patrick Hughes' "The Hitman's Bodyguard" arrived last Thursday and despite receiving just 482 screens (the lowest of this weekend's top five), the action comedy took first place by capturing 30.82% of the sales (556,100 admissions). Interestingly, the film's script, written by Tom O'Connor, was on the 2011 'Black List', an annual survey that ranks the year's most liked films that have not been produced. "The Hitman's Bodyguard" stars Ryan Reynolds and Samuel L. Jackson and has already banked $76.2 million, more than double its production budget of $30 million; in Korea, its arrival marked the return of a foreign film to the top of the pile after a reel of successful local blockbusters reigned in the month of August.

Writer/director Kim Joo-hwan's sophomore film, "Midnight Runners" with Park Seo-joon and Kang Ha-neul, reclaimed second place as "V.I.P" fell abruptly to fifth. From 686 screens, down from 779, "Midnight Runners" added 286,097 admissions (15.11%) to bring its total tally now to 5.3 million, or $37.3 million. That means that Kim's action comedy overtakes "The King" as the fifth highest-grossing film of the year; ahead of it, "The Battleship Island" stands firm on 6.5 million ($44.5 million). Luc Besson is a popular talent in Korea, and his latest film, "Valerian and the City of a Thousand Planets" (based on Pierre Christin's science fiction comic, "Valérian and Laureline"), after failing to wow international audiences, sold 249,514 admissions (13.61%) during its opening weekend.

Up next was the highest grossing film of the year: Jang Hoon's "A Taxi Driver" with veteran actor Song Kang-ho. The film recently rocketed past 10 million admissions after just 19 days in theatres; last year's "Train to Busan" is the only other film to have hit that mega milestone in the same amount of time. With the 238.044 admissions (12.6%) Jang's fourth film (after "Rough Cut", "Secret Reunion" and "The Front Line") collected over the weekend, its total tally now stands at 11.8 million ($82.51 million). Last weekend's number one, "V.I.P" (starring Kang Dong-gun, Kim Myung-min, Park Hee-soon, and Lee Jong-suk), fell sharply out of favor after entering in first last weekend with 25% of the sales; from 582 screens, down from just under 1,000, Park's crime thriller claimed just 135,533 admissions (7.24%). "V.I.P" now sits on 1.3 million admissions: $9.3 million.

Huh Jung's "The Mimic" moved from fourth to sixth with 75,622 admissions (3.98%), followed by David Leitch's "Atomic Blonde" with Charlize Theron. "Atomic Blonde" is Leitch's first solo directing credit and it has already tripled its production cost of $30 million. From 460 screens, the American spy thriller came away from its first weekend in Korea with $768,749 (114,649 admissions) in the bank. "Lo-ma-ui Hyu-il" was up next and opened its account with 61,624 admissions (3.15%) from 436 screens, and the third film in the "Planet of the Apes" films, Matt Reeves' "War for the Planet of the Apes", moved its total tally over the 2-million admissions mark ($14.79 million). The final place went to Choi Seungho's documentary "Criminal Conspiracy". Since its release mid-August, which includes the 28,605 admissions (1.49%) the film claimed here, Choi's critical look at the country's public broadcasting has earned a total of $1.4 million (206,605 admissions).