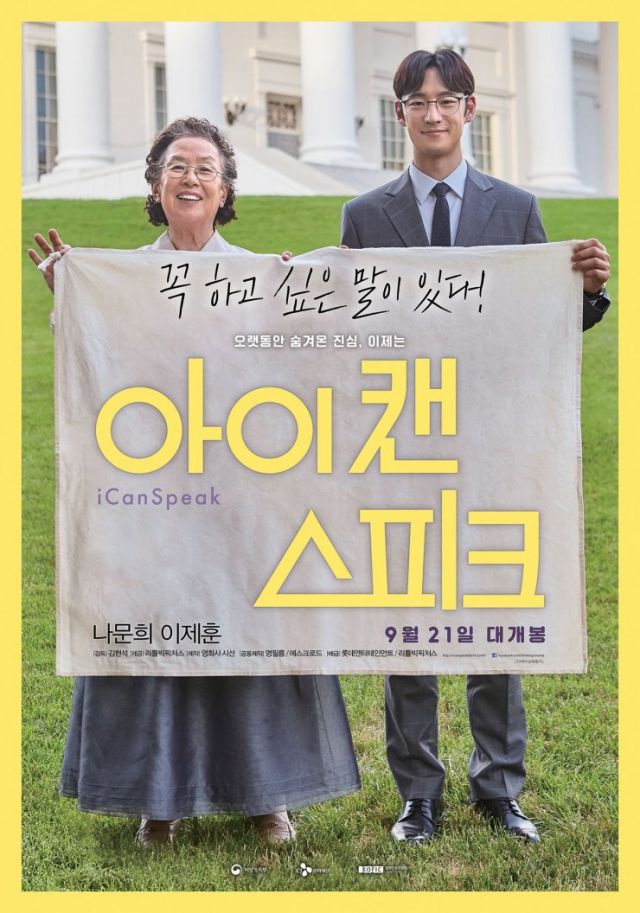 Local drama "I Can Speak" denies "Memoir of a Murderer" a third straight weekend at the top...

"I Can Speak", director Kim Hyun-seok's sixth film ("When Romance Meets Destiny", "Cyrano Agency", "C'est Si Bon"), arrived to 1,140 screens in Korea last Thursday and came out on top ahead of last weekend's number one, "Memoir of a Murderer". In "I Can Speak", Na Moon-hee plays Na Ok-boon, a hot-blooded female detective who forms an unlikely bond with a younger operative (Lee Je-hoon as Park Min-jae) who teaches her English. Kim's latest, his first feature film without a screenwriting credit, opened strong by claiming 604,139 admissions (45.98%) ahead of Korea's biggest national holiday, Chuseok.

Kim's success meant that last weekend's number one, Won Shin-yun's action thriller "Memoir of a Murderer" (Sol Kyung-gu and Kim Nam-gil), was denied a third-straight weekend as the country's top pick. From 678 screens (down from 884), Won's fifth feature earned another $1.5 million, or 213 admissions (16.68%). Since its release on September 6, the film's total tally now sits at 2.4 million ($17.5 million). Won's previous films include the 2013 thriller "The Suspect" (Gong Yoo) and the 2007 crime film "Seven Days" (Kim Yunjin), which claimed 4.1 million and 2 million admissions respectively.

Since its release in the US and UK in June, the action crime-comedy "Baby Driver" has grossed over $220 million worldwide (the film cost an estimated $34 million to produce). With the 153,246 admissions the film claimed here, its second weekend out in Korea, Director Edgar Wright's "Baby Driver"'s bottom line in Korea now moves to $5.1 million (717,131 admissions). Wright's atypical action outing marks the watershed in this weekend's top ten, with the top three films grabbing 75% of the sales.

"The Hitman's Bodyguard" entered in first place at the beginning of September; now its fourth weekend, Patrick Hughes' action comedy has grossed $11.6 million in Korea alone, $424,602 (4.47%) of which came from this past weekend. Not far behind, and down two places, came "American Made", a biographical crime thriller based on the true story of an American drug smuggler turned DEA informer. The film failed to launch in America (the film has so far grossed $50.3 million, some $30 million short of its production costs); in Korea, "American Made" (which stars Tom Cruise, a popular actor in Korea) grabbed another 41,150 admissions (3.14%), moving its total admission count to 385,640 ($2.7 million).

The second highest new release of the week was up next. "Contratiempo" (known as "The Invisible Guest" in English), a Spanish suspense film, arrived with "I Can Speak" on Thursday and captured 2.8% of the sales (44,115 admissions). The film version of Stephen King's epic novel "It" failed to float around the upper echelons of the Korean box office during its third weekend out. Andy Muschietti's adaptation of King's classic horror fell from fourth to seventh with just 30,241 admissions (2.38%), followed by James Gray's biographical adventure film "The Lost City of Z" with Charlie Hunnam.

Despite heavy praise by international critics, Gray's adaptation of David Grann's book of the same name is still running at a loss. The film's first weekend in Korea yielded $192,527 (26,989 admissions) from 398 screens nationwide. "Cocotama The Movie 2017" fell one place to ninth with 12,086 admissions (0.89%), and the final spot in the top ten went to dark fantasy film, "A Monster Calls" by J. A. Bayona. "A Monster Calls" (starring Sigourney Weaver and Felicity Jones) fell four places after entered in sixth last weekend. With the 11,001 stubs the film claimed here, the film's total gross in Korea stands at $521,708, or 75,067 admissions.