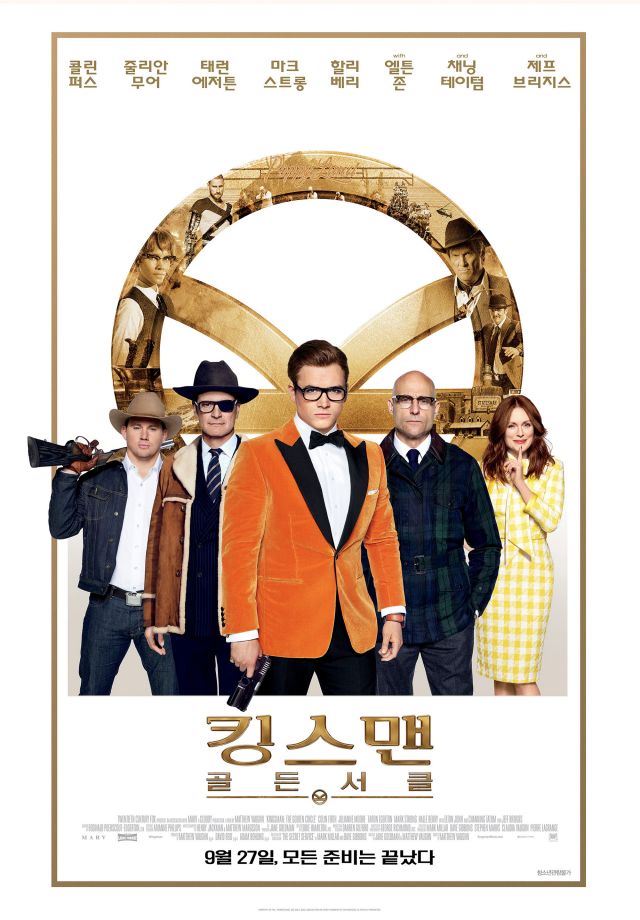 "Kingsman" sequel and local drama "I Can Speak" rule ahead of Chuseok...

Despite earning just 50,000 admissions less than its chart-topping take last weekend, Kim Hyun-seok's comedy-drama "I Can Speak" was swiftly overtaken by the foreign spy comedy "Kingsman: The Golden Circle". From a hefty 1,677 screens nationwide, Matthew Vaughn's sequel to the popular 2014 original - which he also directed and that grossed $414.4 million worldwide - has raced to 2.3 million admissions ($16.4 million), 1.5 million (64.48%) of which came from its first weekend out.

Director Kim Hyun-seok's sixth film had its screen count cut from 1,140 to 927 and gained 549,434 admissions (20.78%). Since its release two weeks ago, "I Can Speak" (starring Na Moon-hee and Lee Je-hoon) has grossed $11.1 million, or 1.6 million admissions. The top two films combined claimed 85% of the sales, just ahead of one of Korea's biggest national holidays, Chuseok.

Third place's total tally was significantly less and marked the watershed in the weekend's top ten. "Yo-Kai Watch Movie 3", a Japanese film that combines live-action with computer graphics, the third feature in the popular "Yo-Watch" franchise, only managed 81,951 admissions (2.89%), but it was good enough for a podium position. Not far behind was Won Shin-yun's new thriller, "Memoir of a Murder", starring Sol Kyung-gu. After it was denied a third straight weekend at the top last week, Won's fifth film is slowly reeling from big releases both foreign and domestic and fell to fourth here with 72,787 admissions (2.78%). Since its release early last month, "Memoir of a Murderer" has banked $18.4 million from 2.6 million admissions. The film requires another 100,000 admissions to overtake "Guardians of the Galaxy VOL. 2" and become the fifteenth highest-grossing film of the year.

"The Lego Ninjago Movie" entered the fray in fifth place with 67,100 stubs (2.39%), followed by the Edgar Wright's audacious action flick "Baby Driver" in sixth (down three places) with 35,954 (1.37%). "Baby Driver" was produced for $34 million and has currently grossed $224.6 million worldwide: Wright's most successful film to date. "The Hitman's Bodyguard" has been active in Korea's charts for over a month now; the American action comedy moved its bottom line to $11.8 million (1.6 million admissions), $170,863 of which (30,440 admissions) was banked over the weekend.

It was a close contest between eighth and ninth: the Disney Junior special "Sofia the First: The Mystic Isles" scored 16,573 admissions (0.55%) from 129 screens, while "The Invisible Ghost" (aka "Contratiempo") fell four places with just 16,514 (0.64%) going its way. The final spot went to a new local documentary by Lee Sang-ho ("The Truth Shall Not Sink with Sewol", 2014). In Lee's sophomore nonfiction film, "Suicide Made", he investigates the death of singer Kim Kang-seok twenty years after the fact. From 129 screens, "Suicide Made" claimed 14,888 admissions (0.58%) to round out the list of the weekend's top performers.