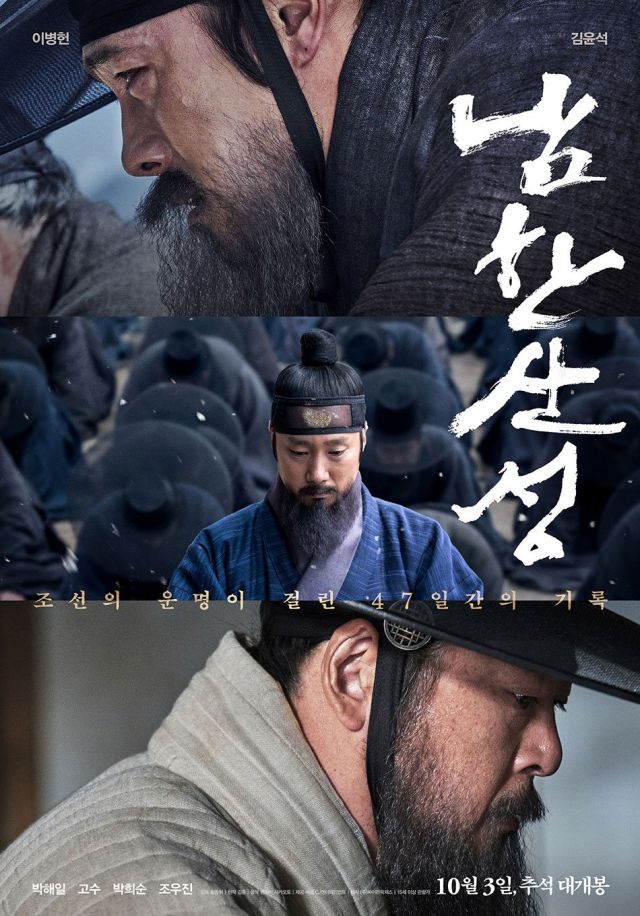 "The Fortress" narrowly outplays "The Outlaws" over Chuseok...

Director Hwang Dong-hyuk's Joseon-era drama "The Fortress" (based on Kim Hoon's novel) narrowly came out ahead of Kang Yoon-Sung's crime thriller "The Outlaws" during Korea's biggest national holiday, Chuseok. Both films were released on Oct. 3 and pooled from 1,226 and 1,314 screens respectively, and together they captured 60.74% of the sales.

"The Fortress" stars Lee Byung-hun, Kim Yun-seok and Park Hae-il and takes place in 1636 when King Injo spent 47 days in Namham Mountain Fortress to evade the Qing invaders. The film, Hwang's fourth ("My Father", "Silenced", and "Miss Granny"), claimed 1.3 million admissions, or $9.7 million (32.99%), despite having around a hundred screens less than its closest competitor.

Veteran action star Ma Dong-seok shares the screen with the versatile Yoon Kye-sang in Kang Yoon-Sung's debut film, "The Outlaws". The 1.1 million admissions ($8.2 million) it earned constituted 27.75% of the sales. In a recent interview with The Korea Times, Ma ("The Neighbor", "Nameless Gangster", "The Unjust", "Train to Busan") said that he hopes the film "thrills audiences and helps them relieve some stress".

Last weekend's number one, the eccentric spy comedy "Kingsman: The Golden Circle" by director Matthew Vaughn, was unceremoniously bumped to third in the wake of Hwang and Kang's recent entries. "Kingsman" added 716,387 admissions (18.54%) from 909 screens, down from 1,677, which moves its bottom line in Korea now to $31.8 million (the eighth highest-grossing film of the year); worldwide, Vaughn's sequel to the popular 2014 original has grossed $253.6 million (the film cost $104 million to produce).