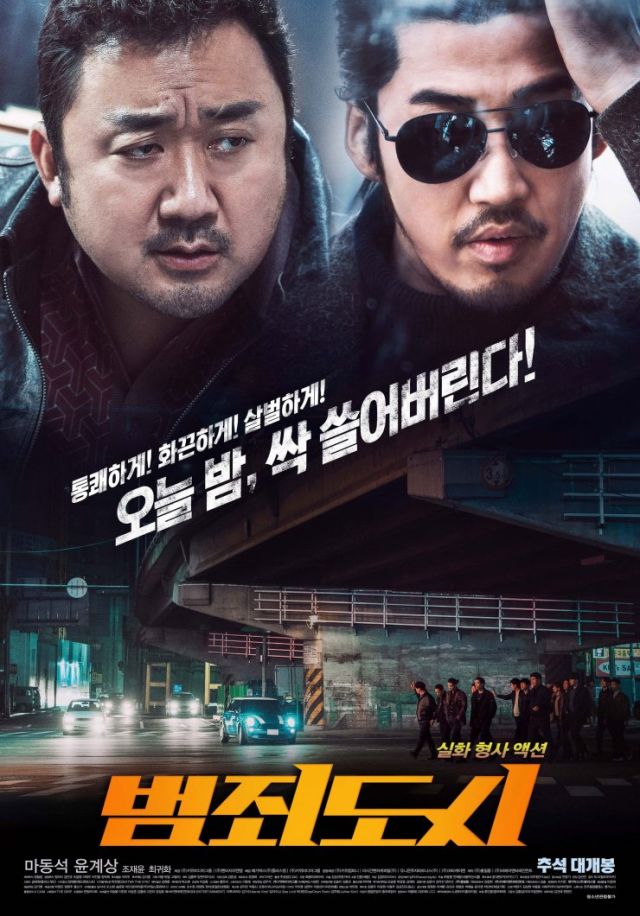 Kang Yoon-Sung's "The Outlaws" retained the top spot by holding off some strong competition from the recently released American disaster film, "Geostorm". Kang's debut failed to trump "The Fortress" over Chuseok two weekends ago, but since then it has held strong as the country's film of choice. From 994 screens, down from 1,127, "The Outlaws" (Ma Dong-seok and Yoon Kye-sang) claimed another 786,049 admissions (40.56%), moving its total tally now to 4.9 million, or $36.2 million.

"Geostorm" is an epic disaster film by Dean Devlin set in the near future where the advanced system of satellites that controls the Earth's climate goes awry. The film is Devlin's debut and stars Gerard Butler, Kim Sturgess, and Abbie Cornish. "Geostorm" arrived in Korea last Thursday and from 854 screens around the country, the film attracted 605,062 admissions (31.67%).

Lee Won-tae's "Man of Will" (starring Cho Jin-woong) makes it three debutants in a row this week at the top. Lee has been involved in other films before ("Gabi" and "The Joseon Magician"), but this is his first time flying solo in the director's chair. "Man of Will" is a Joseon-era action film about a young man whose determination to defend the Korean people sees him rise as an independence fighter and commander. Lee's debut managed 201,113 admissions (9.7%), or $1.4 million, from 201,113 screens around the country.

Fourth place went to this year's Chuseok champ, "The Fortress" by Hwang Dong-hyuk. Unlike "The Outlaws", Hwang's historical drama was not able to sustain the success it garnered during its opening weekend. With the 64,378 admissions (3.13%) the film claim here, "The Fortress"'s bottom line now moves to $27 million (3.7 million admissions). With around 20,000 admissions less came "Kingsman: The Golden Circle", which broke the record for the biggest single-day release for an R-rated film in Korea late September. The latest "Kingsmen" remained unmoved in fifth and is on the verge of hitting the 5-million admissions mark. If the film can surpass "Beauty and the Beast"'s 5.1 million admissions ($37.2 million) it will become the seventh highest-grossing film of the year.

Denis Villeneuve's "Blade Runner 2049" has received critical acclaim and praise from fans of Ridley Scott's 1982 original, but this sci-fi sequel has only just come into the black; the film took between $150-$185 million to produce but has only recovered $194.1 million. In Korea, the film entered in fourth last weekend with 8.82% of the sales, but then plummeted to ninth here with just 24,781 admissions (1.26%). The final place went to the 3D computer animated sequel "The Nut Job 2: Nutty by Nature" by Cal Brunker. This is the animation's third weekend out now and it has managed just 384,400 admissions ($2.5 million), 23,604 of which came from this past weekend.