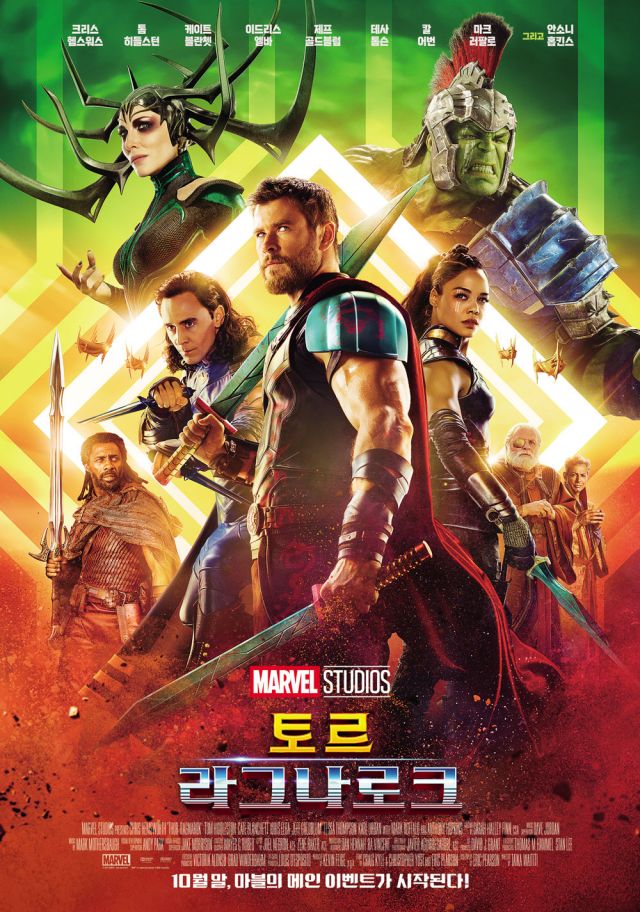 Marvel's latest superhero outing, "Thor: Ragnarok", the third "Thor" film, arrived in Korea last Wednesday to topple the sleeper hit "The Outlaws". From 1,639 screens around the country, "Ragnarok" claimed 1.5 million admissions ($11.8 million), or 63.7% of the weekend sales. The film stars Chris Hemsworth (as the God of Thunder himself), Tom Hiddleston (Hulk), Cate Blanchett, Idris Elba and Jeff Goldblum and has already grossed over $100 million worldwide (the film was produced for $180 million). "Thor: Ragnarok" is the seventeenth film in the Marvel Cinematic Universe.

Last weekend's number one, Kang Yoon-Sung's "The Outlaws" (starring Ma Dong-seok and Yoon Kye-sang), fell one place in the wake of the new "Thor" film after a two-week run at the top after Chuseok. With 476,051 admissions (19.28%), director Kang's action crime film total tally now stands at 5.8 million, or $42.6 million, making it the fifth highest-grossing film of the year behind "The Battleship Island" (6.5 million) and "Spider-Man: Homecoming" (7.2 million).

A new Japanese romance drama was up next in third. Sho Tsukikawa's "Let Me Eat Your Pancreas" is based on the 2015 novel by Your Sumino (which was also adapted into a cartoon); it was also recently screened at Korea's largest film festival: Busan International Film Festival (BIFF). The 115-minute 'transmedia film' was allocated just 218 screens and from then claimed 5.39% of the sales (135,299 admissions). Close behind Sho's atypical drama was "Geostorm", an American sci-fi disaster film by director Dean Devlin ("Independence Day: Resurgence", "Flyboys", "Godzilla"). "Geostorm" entered the fray last weekend in second with 31.65% of pie (605,524 admissions), but fell to fourth here with 112,934 (4.33%).

Lee Won-tae's debut "Man of Will" also fell two places. Lee's 115-minute action film had its screen count cut from 747 last weekend to just 357 here and added 27,527 admissions (0.97%), moving its bottom line to $2.4 million (358,233 admissions). "The Fortress" was the country's film of choice over the recent extended Chuseok holiday, but since then, unlike the "The Outlaws", which also competed over Chuseok, it was unable to retain its place in the upper echelons of the chart. 21,247 admissions (0.8%) was all that Hwang Dong-hyuk's historical drama could muster during its fourth weekend out. The film, Hwang's fourth ("My Father", "Silenced", and "Miss Granny"), is unlikely to get the 175,000 stubs required to push it past the 4-million admissions mark. Still, with 3.8 million admissions, it is the tenth highest-grossing film of the year ahead of "The Mummy" (3.6 million) and behind "Kingsmen: The Golden Circle" (4.9 million).

Japanese director Takahiro Miki's 2016 adaptation "My Tomorrow, Your Yesterday" fell just the one place from sixth to seventh with 18,206 admissions (0.54%), followed by the documentary musical "Beautiful Tomorrow" (featuring Park Hyo-shin and Jung Jae-il) by director Jang Jae-hyuk on 16,951 (0.73%). The penultimate place in this week's top ten was claimed by the Norwegian animation "Two Buddies and a Badger", the fourth new release this week to make it into the ten top; from 292 screens, the foreign animation came away from its first weekend in Korea with 13,993 admissions (0.48%). The final spot went to another Japanese animation, the supernatural anime fantasy "No Game No Life: Zero". The film aired in Japan back in July and has been open in Korea for two weeks now. Currently, "No Game No Life: Zero" has earned $456,000 (62,124 admissions) in Korea alone, $88,090 (0.47%) of which came from this past weekend.