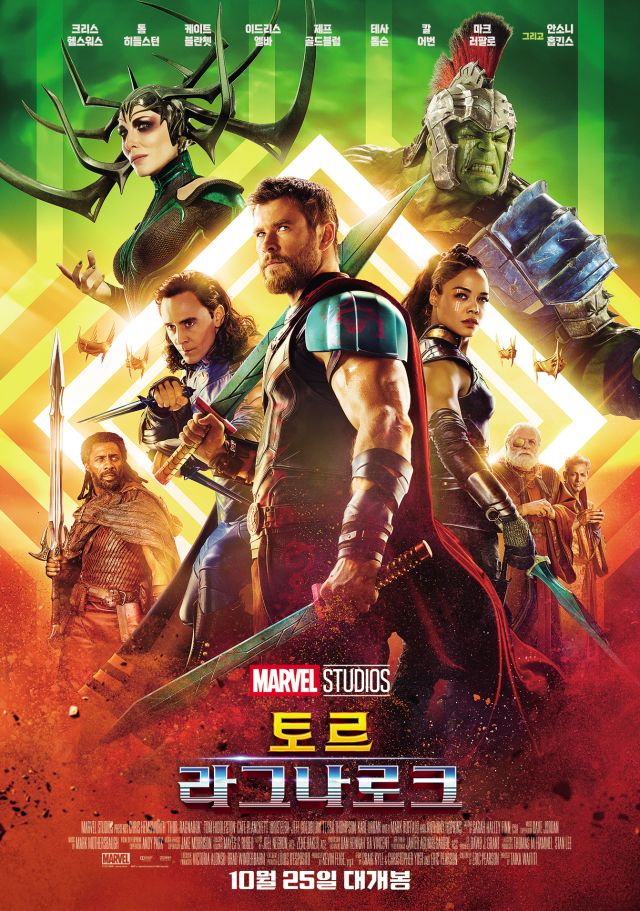 "Ragnarok" still rules despite stiff competition from "The Bros"...

"Thor: Ragnarok" stood its ground against local writer/director Chang You-jeong's new comedy-drama, "The Bros". From 1,047 screens, down from 1,640, the seventeenth film in the Marvel Cinematic Universe added 833,949 admissions (38.31%), bringing its total tally in Korea to 3.7 million, or $28.8 million. Worldwide, from a production budget of $180 million, "Thor: Ragnarok" (starring a more comedic Chris Hemsworth) has grossed nearly half a billion dollars. Taika Waititi's "Thor" now needs another 256,000 admissions to overtake "The Fortress" (3.8 million) and enter this year's top ten.

"The Bros" is Chang You-jeong's second feature film after the 2010 romantic comedy, "Finding Mr. Destiny" starring Lim Soo-jung and Gong Yoo, which managed a little over a million admissions around this same time of year. Chang's new comedy was very competitive: from 889 screens, just 158 less than "Thor", "The Bros" captured 26.74% of the weekend sales (605,688 admissions), or $4.5 million. The film stars Ma Dong-seok, Lee Dong-hwi and Lee Hanee.

The sleeper hit "The Outlaws" (also starring Ma Dong-seok, alongside Yoon Kye-sang) competed over Chuseok against Hwang Dong-hyuk's historical film "The Fortress" but has since stayed on to become the fifth highest-grossing film of the year with 6.3 million admissions ($46.8 million), 266,586 of which (12.32%) came from this past weekend. "The Outlaws" is now 219,000 admissions behind Ryoo Seung-wan's "The Battleship Island", the fourth highest-grossing film of the year.

The American disaster film"Geostorm" entered in second place the weekend after Chuseok, then fell to fourth last weekend, and now sits in ninth with 1.03 million admissions ($7.5 million), 12,122 (0.46%) of which were earned over the weekend. The final spot went to the third new local entry to make the top ten, Pang Eun-jin's melodrama "Method" starring Park Sung-woong and Yoon Seung-ah. Bang's fifth film, which is just 82-minutes long, came away from its first weekend out with 8,771 admissions (0.39%).