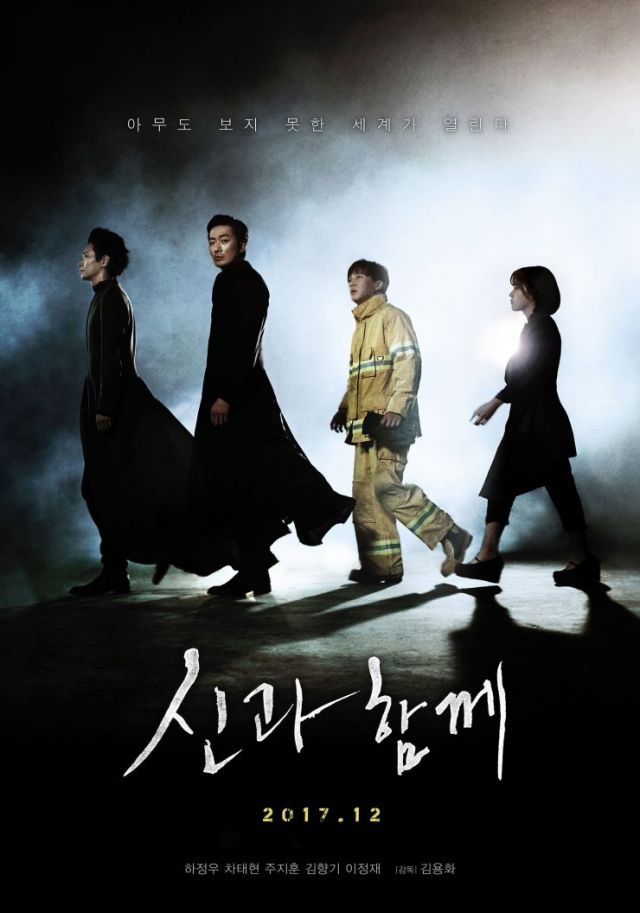 Local webcomic adaptation "Along With the Gods" surpasses 10-million admissions...

Director Jang Joon-hwan made a splash on the festival circuit back in 2003 with the cult sci-fi hit "Save the Green Planet". Since then, Jang has directed three other films, including this weekend's number two, "1987: When the Day Comes". Unlike Jang's previous films, "1987" is based on a real event in Korea's socio-political history: the death of student activist Park  Jong-cheol during the democratisation of Korea. The 129-minute drama entered the fray a week after Kim's smash hit, and with the million admissions the film claimed here, it's total tally now stands at 4 million ($30.8 million).

The highest new foreign entry was up next in third. Jake Kasdan's "Jumanji: Welcome to the Jungle" is the sequel to the popular 1995 film, which is itself was based on a children's book from the early 80s. Starring Dwayne "The Rock" Johnson, Jack Black, Kevin Hart and Karen Gillan, the latest "Jumanji" accrued 656,849 admissions (18.31%) from 783 screens. The film cost an estimated $100 million to produce and has thus far grossed four times that internationally. "Ferdinand", a 3D computer-animated comedy adventure film from the U.S., had its premiere in Los Angeles mid-December and arrived in Korea to 696 screens. Its 245,752 admissions (6.21%) was enough to secure fourth place during its first weekend out.

With the arrival of "Jumanji" and "Ferdinand", Yang Woo-seok's action drama "Steel Rain" (starring Jung Woo-sung and Kwak Do-won as military personnel on either side of the DMZ) fell two places to fifth. From 494 screens, down just 100 from last weekend, Yang Woo-seok's sophomore feature (after the massively successful "The Attorney" in 2013) added another 119,076 admissions (3.28%) to bring its bottom line now to $4.3 million (4.3 million admissions).

Just behind Yang's timely political drama sat "The Greatest Showman", a period musical from America starring Hugh Jackman. Like this weekend's number one, this is the third weekend out for "The Greatest Showman" and with the 112,002 admissions it claimed here, the film has surpassed a million admissions ($8.2 million). Despite receiving three nominations at the 75th Golden Globe awards, the film has only managed $120 million worldwide (the film cost $84 million to produce).

"Wonder", director Stephen Chbosky's adaptation of R.J. Palacio's 2012 novel, performed extremely well in America. Since its release in the U.S. Mid-November, "Wonder" has grossed ten times its modest $20 million production budget. In Korea, and with the 25,495 admissions (0.7%) it claimed here, the film's total tally currently sits on 147,682, or $1 million.

"Pokémon the Movie: I Choose You!" by director Kunihiko Yuyama fell three places to eighth with just 18,621 admissions (0.47%), followed by a re-release of the highest-grossing Japanese anime film of all time, Makoto Shinkai's "Your Name", with 17,758 admissions (0.48%). "Your Name" has now grossed $28 million (3.7 million admissions) in South Korea alone. The final place went to the latest "Pororo" film, "Pororo, Dinosaur Island Adventure" by directors Kim Hyeon-ho-I and Yoon Je-hwan. From just 93 screens, the latest "Pororo" adventure found 10,399 admissions (0.26%) to move its total take now to 812,679 admissions or $5.7 million.