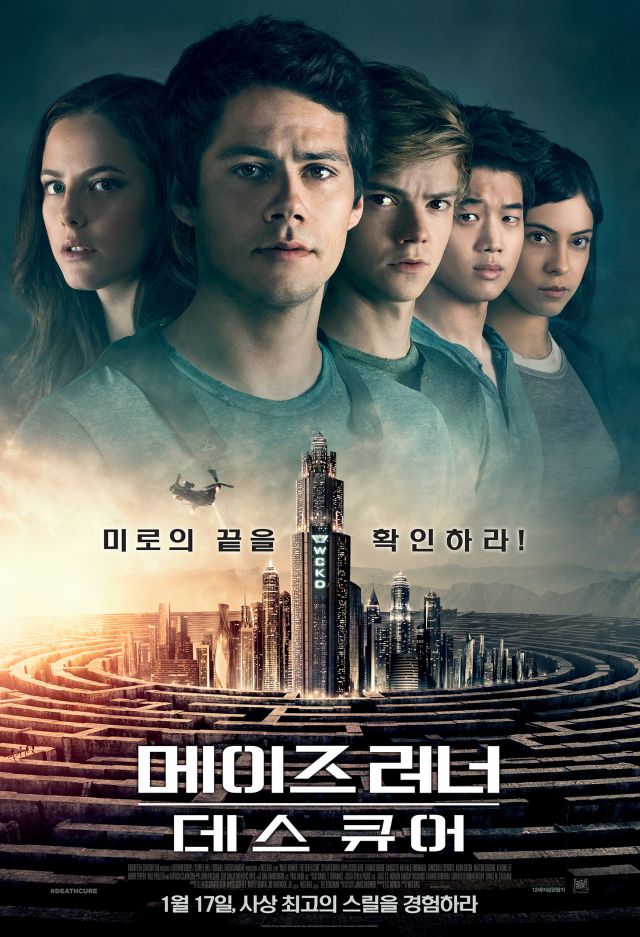 "1987: When the Day Comes" and "Along With the Gods: The Two Worlds" (now the third highest grossing Korean film of all time) have been grabbing the tiger's share of the sales so far this year. That changed over the weekend with the arrival of "Maze Runner: The Death Cure", the third and final instalment in the popular American dystopian sci-fi series based on the novels by James Dashner. Director Wes Ball's action-packed adaptation so became the first foreign film to top the Korean box office this year, but not by much.

From 1,090 screens, "Maze Runner: The Death Cure" claimed 863,445 admissions (28.86%), or $6.9 million. (South Korea was actually the first country to screen the film; it opens in America later this week.) Not far behind entered Choi Seong-hyeon's debut film, the comedy-drama "Keys to the Heart" starring Lee Byung-hun, Youn Yuh-jung and Park Jung-min. "Keys to the Heart" arrived, like the final "Death Cure", last Wednesday. From 856 screens, Choi's debut captured 21.02% of the box office pie to take second place.

Last weekend's number one, Jang Joon-hwan's "1987: When the Day Comes" (Kim Yun-seok, Ha Jung-woo, Yoo Hae-jin, Kim Tae-ri), was unable to retain pole position after it had just overtaken Kim Yong-hwa's blockbuster "Along With the Gods: The Two Worlds" the week before. The film's screen count was slashed from 1,122 to 745, from them 462,740 admissions (15.24%) were accumulated from Friday to Sunday. Since its release two days after Christmas, Jang's fourth film has now grossed $50.2 million (6.6 million admissions), making it the second highest-grossing film of the year. The highest grossing film was up next.

"Along With the Gods: The Two Worlds" is the first of two films adapted from Joo Ho-min's webcomic "Singwa Hamgge". It's been a huge success: since its release just before Christmas, and with the 360,825 admissions scored here (11.71%), "Along With the Gods: The Two Worlds" has raced to become the third highest-grossing Korea film in history. Topping that list is "The Admiral: Roaring Currents" ($127 million/17.6 million admissions) and then "Ode to My Father" ($103 million/14.2 million admissions). The rest of the this week's top performers claimed less than 100,000 admissions.