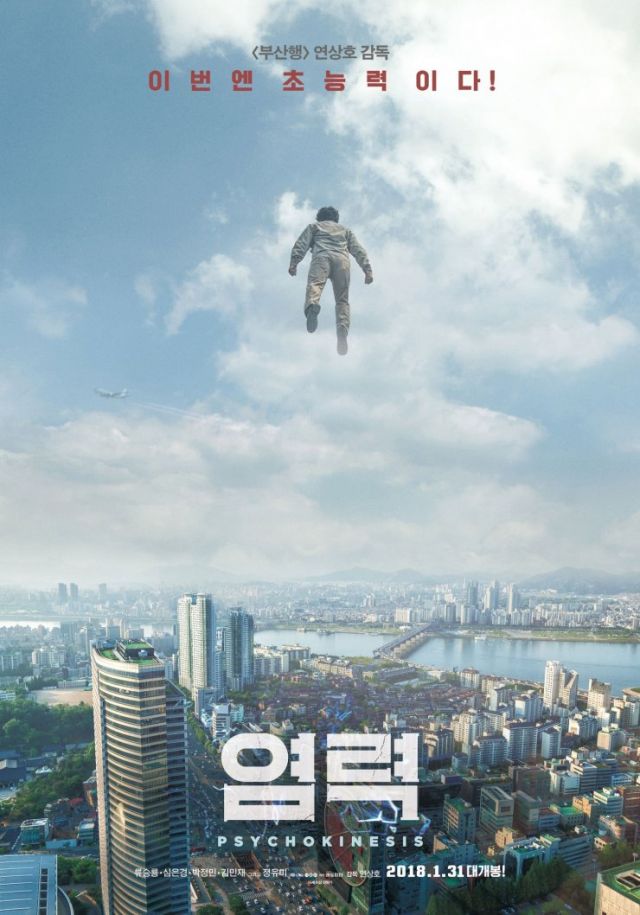 "Psychokinesis" and "Keys to the Heart" score a one-two finished for the home team...

Before directing his 2017 live-action blockbuster "Train to Busan" (11.5 million admissions), Yeon had four adult 2D animations under his belt: "King of Pigs", "The Window", "The Fake", and "Seoul Station" (the animated prequel to "Train to Busan"). Yeon latest film follows Sin Seok-heon (played by Ryu Seung-ryong) who coincidentally acquires supernatural abilities that allow him to move matter with his mind, which he then uses to save his daughter, Sin Roo-mi (Shim Eun-kyung), from harm. From 1,051 screens, "Psychokinesis" claimed 471,776 admissions (24.19%) and dislodged "Key to the Heart" at the top of the chart.

The fourth instalment in the popular supernatural horror film series "Insidious", "The Last Key" by director Adam Robitel, opened its Korean account with 212,115 admissions (10.95%) from 769 screens around the country. "Insidious: The Last Key" has been out on American's cinema circuit since early January and has received mixed reviews thus far; filmgoers in America and internationally, however, have helped it gross around ten and a half times its $10 million budget.

Kim Yong-hwa's fantasy drama "Along With the Gods: The Two Worlds" (starring Ha Jung-woo, Cha Tae-hyun, Ju Ji-hoon and Kim Hyang-gi), the first of two films adapted from Joo Ho-min's webcomic, has been active in the charts for over a month now. The film, now enjoying its seventh weekend out, still had over 500 screens from which to pool and from them added 125,012 admissions (6.46%). Kim's film is now the second high-grossing Korean film of all time with $104.6 million (14.2 million admissions); the current number one is "The Admiral: Roaring Currents" with $124.4 million (17.6 million admissions).

"Maze Runner: The Death Cure" entered in first mid-January in Korea (the first country to screen it), then fell to third last weekend, and now sits in sixth with 105,755 admissions (5.38%). With this week's haul tallied, the third and final "Maze Runner" film's total admission count in Korea stands at 2.2 million, or $16.6 million. "12 Strong", an American war drama by Nicolai Fuglsig (based on the nonfiction book "Horse Soldiers" by Doug Stanton), arrived at 508 screens and claimed 86,015 admissions (4.63%) during its first weekend out. "12 Strong" takes place post-9/11 in Afghanistan and follows a team of special military operatives as they wage war against the Taliban.

Jang Joon-hwan's timely story about student activist Park Jong-cheol, "1987: When the Day Comes" (with Kim Yun-seok, Ha Jung-woo, Yoo Hae-jin, Kim Tae-ri, Park Hee-soon, and Lee Hee-jun), came out just after Christmas in Korea and has been one of the most popular local films of the year so far. From 401 screens, Jang's fourth feature film claimed another 62,496 admissions (3.2%) to move its bottom line to $52.9 million (7.1 million admissions). The final two places went to two new foreign films: the American 3D animation "Maya the Bee: The Honey Games" and Ridley Scott's "All the Money in the World" (with Michelle Williams, Christopher Plummer, and Mark Wahlberg) claimed 46,168 (2.14%) and 26,943 admissions (1.4%) respectively.