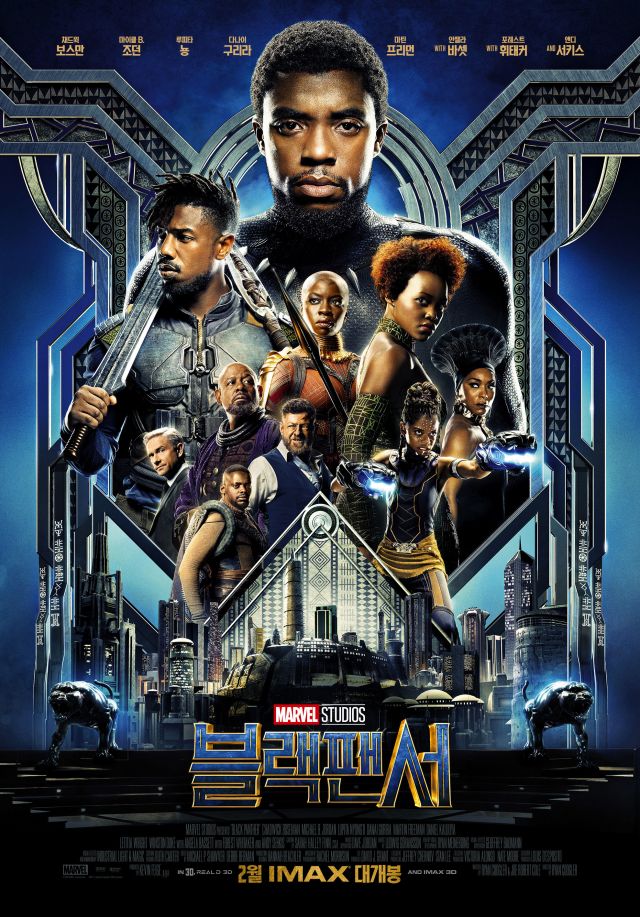 "Black Panther" takes the Land of the Morning Calm by storm...

Marvel's much-anticipated superhero film "Black Panther" arrived in Korea on Valentine's Day and quickly rose to the top of the chart over the weekend. The film, the eighteenth in the so-called Marvel Cinematic Universe (MCU), was produced for $200 million and has already grossed close to double that figure; in Korea, and from 1,620 screens around the peninsula, the King of Wakanda opened his account with $15.6 million from 1.9 million admissions (51.33%).

Last weekend's number one, the third installment in the "Detective K" period comedies, "Detective K: Secret of the Living Dead" (starring Kim Myung-min, Oh Dal-soo and Kim Ji-won) by Kim Seok-yoon, added another 713,732 admissions (18.19%) to bring its total tally now to just over 2 million, or $15.7 million. The film still has some way to go to attract as much as attention as the first two films (the original "Detective K" claimed 4.7 million admissions in 2011 and three years later "Detective K: Secret of the Lost Island" managed 3.8 million). Together the top two films grabbed just under 70% of the total weekend sales.

Third and fourth went to two local films. Noh Dong-seok's third film (after "Boys of Tomorrow" and "My Generation"), the action thriller "Golden Slumber" (Gang Dong-won), is an adaptation of a 2007 Japanese novel of the same name by Kotaro Isaka. "Golden Slumber" was allocated 833 screens and from them scored $4.9 million from 628,109 admissions (16.21%). Some 400,000 stubs behind entered the historical film "Heung-boo: The Revolutionist" by director Jo Geun-hyeon, his fourth film since his directorial debut with "26 Years" in 2012. The film is based on the popular local folktale "Heungbu and Nolbu" from Korea's Joseon era about two feuding brothers, one greedy, the other generous (Jo's version follows the nicer brother, played by Jung Woo). From 627 screens, "Heung-boo: The Revolutionist" earned $1.6 million from 211,565 admissions (5.38%).

Another detective film entered the fray this past week, this time from Japan in anime form. "Detective Conan: Jolly Roger in the Deep Azure" is the eleventh in the popular series and was also released in Japan eleven years ago. Its first weekend out in Korea yielded 85,444 admissions ($621,627) from 449 screens. Not far behind, and down three places, was Pixar's Oscar-nominated 3D animation "Coco". "Coco" has been active in Korea's charts since mid-January and, with the 63,592 admissions (1.56%) the film claimed here, it's total tally now stands at 3.4 million, or $25.1 million (currently the third highest-grossing film of the year). Worldwide, and from a production cost of between $175 ~ $200 million, "Coco" has grossed $730.4 million.

Choi Seong-hyeon's heartfelt drama "Keys to the Heart" (starring Lee Byung-hun, Park Jung-min and Youn Yuh-jung) fell sharply from second to seventh with 63,592 admissions from 315 screens (down from 724 the previous weekend), moving its bottom line to $25.1 million (3.3 million admissions). Choi's latest was not the only film to tumble: "Paddington 2" entered in fourth last weekend with just over a 100,000 admissions; in week two, however, it fell four places with half that amount (1.18%).

Korea's second highest-grossing film of all time was up next, now enjoying its ninth weekend out. Kim Yong-hwa's "Along With the Gods: The Two Worlds", the first of two adaptations of Joo Ho-min's webcomic, found another 31,842 stubs (0.84%) to push its record-breaking bottom line to $107.1 million (14.3 million admissions); Kim's fantasy flick is second only to "Roaring Currents" ($124.4 million from 17.6 million admissions) in the list of the country's biggest blockbusters. The final place went to Michael Gracey's "The Greatest Showman", an Oscar-nominated American musical starring Hugh Jackman. Gracey's film has been on the Korean cinema circuit for as long as Kim's hit has been, and with the 8,110 it scored here, it's total admission count now stands at 1.3 million ($10.5 million). Worldwide, "The Greatest Showman" has banked $320.1 million.