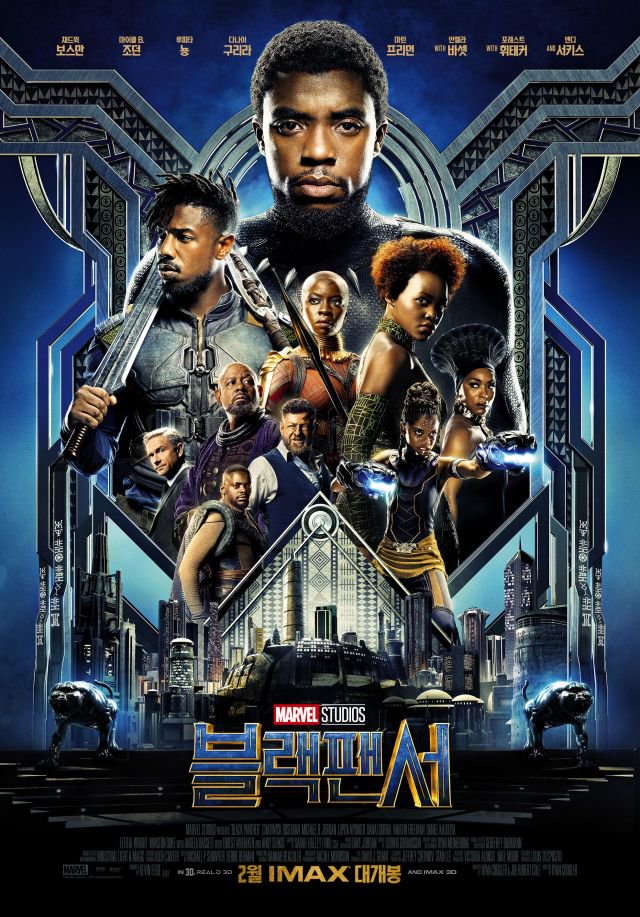 The King of Wakanda, "Black Panther", continued its reign atop Korea's box office this past weekend by securing 43.34% of the sales. From 1,242 screens (down from 1,620), the eighteenth film in the Marvel Cinematic Universe added 708,800 admissions ($5.7 million) to bring its total gross in Korea now to $35.8 million (4.4 million admissions). Director Ryan Coogler's recording-breaking blockbuster is now the highest-grossing foreign film of the year in Korea and the third overall; worldwide, since its release in America just after Valentine's Day, "Black Panther" has amassed an impressive $548.9 million.

"What Happened to Monday", a dystopian sci-fi thriller by Norwegian director Tommy Wirkola, was the highest new entry. The film was released overseas mid-2017 but only arrived in Korea last Thursday. "What Happened to Monday" claimed 238,375 admissions (14.53%, or $1.9 million) from 355 screens for second place. The highest local entry was Noh Dong-seok's third feature "Golden Slumber", an assassin-on-the-run thriller starring Gang Dong-won based a story by Japanese writer Kotaro Isaka. The film entered in third last weekend and held that position once again: from 684 screens (down from 833), "Golden Slumber" collected 158,120 admissions (9.34%) to bring its total tally to 1.3 million, or $10.1 million.

The third installment in the "Detective K" series of Joseon-era mystery/adventure films, "Detective K: Secret of the Living Dead" (starring Kim Myung-min, Oh Dal-soo and Kim Ji-won), has been on circuit since the second week of February, but its current trajectory suggests that it will not outperform the first two films. With the weekend's figures considered, Kim Seok-yoon's film has grossed $17.9 million from 2.3 million admissions, 146,771 admissions of which came from this past weekend. ("Detective K" earned 4.7 million admissions, and "Detective K: Secret of the Lost Island" claimed 3.8 million.)

Guillermo del Toro fantasy drama "The Shape of Water" (winner of the Golden Lion award for Best Film at the Toronto International Film Festival last year) arrived at 404 screens and attracted 132,524 admissions (8.16%) during its first weekend out, followed by the final feature in erotic romance series "Fifty Shades": "Fifty Shades Freed" by director James Foley. The final instalment in the series had 213 screens from which to pool from and captured just under 5% of the sales (77,255 admissions). Worldwide, since its release in America and France earlier this month, "Fifty Shades Freed" has earned $320.4 million (the film cost an estimated $55 million to produced).

With 32,041 admissions (1.72%), Paul King's animated sequel "Paddington 2" moved up one place from eighth to seventh, followed by the Japanese animated feature film, "Detective Conan: Jolly Roger in the Deep Azure" down four places with 29,616 admissions. Pixar's Oscar-nominated "Coco", currently the second highest-grossing foreign film of the year and fourth overall, found an additional 27,812 admissions, bringing its total now to 3.4 million (25.5 million) since its released mid-January.

Director Jo Geun-hyeon's dramatised version of the popular "Heungbu and Nolbu" folktale from Korea's Joseon era, "Heung-boo: The Revolutionist" (starring Jung Woo, Kim Joo-hyuk, Jung Jin-young, and Jung Hae-in), tumbled from sixth to tenth in the chart during its second weekend out. After scoring 211,910 admissions from 627 screens last weekend, the film's second-week performance slumped to just 25,732 (1.43%) from 391. With this weekend's figures added, "Heung-boo" has grossed just over $3 million from 404,677 admissions.