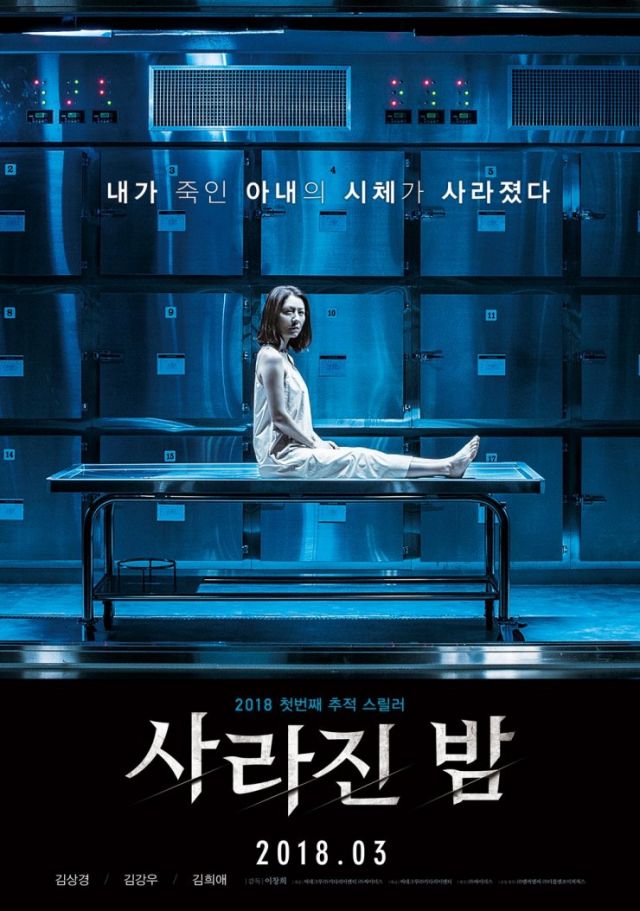 Lee Chang-hee's "The Vanished", his debut, arrived last Wednesday and topped the Korean box office during its first weekend out. "The Vanished" follows a detective (Kim Sang-kyung) and a married couple (Kim Kang-woo and Kim Hee-ae) as they probe the mysterious disappearance of cadavers from the National Institute of Science Research. From 919 screens nationwide, Lee's thriller claimed 519,991 admissions (32.84%), or $4 million, to supplant Hong Chang-pyo's "The Princess and the Matchmaker" at the top.

Based on the popular series of video games of the same name, specifically the 2013 game by Crystal Dynamics, Roar Uthaug's "Tomb Raider" (played by Alicia Vikander) follows daredevil adventurer Lara Croft as she searches for her missing father, Richard. The American action-adventure only gets released in its home country next week but arrived in Korea late last week. From 806 screens, the latest "Tomb Raider" captured 20.22% of the sales (313,292 admissions) for second place. Last weekend's number two, the local drama "Little Forest" by Yim Soon-rye, fell one place with 261,141 admissions (16.45%), bringing its total tally to 1.1 million ($9.2 million).

Hong Chang-pyo's historical romantic comedy "The Princess and the Matchmaker" opened its account in pole position last weekend with just under 30% of the sales (489,913 admissions). Week two of Hong's period piece, however, saw it managed just 156,624 admissions (9.74%) from 647 screens (down from 966). With this week's admissions counted, "The Princess and the Matchmaker" has now grossed $9.2 million from 1.2 million admissions.

With less than half that of Hong's was the highest-grossing foreign film of the year: Marvel's "Black Panther" starring Chadwick Boseman and Michael B. Jordan. The eighteenth film in the so-called Marvel Cinematic Universe (MCU) was produced for around $200 million, and since its release just after Valentine's Day, the film (now the highest-grossing solo superhero of all time) has banked over a billion dollars worldwide. In Korea, and with the 70,585 admissions (4.45%) it earned here, "Black Panther" (which features a major chase scene set in Busan) has made $42.4 million from 5.3 million admissions.

The Oscar-winning "The Shape of Water" by director Guillermo del Toro fell one place to sixth with 55,277 (3.62%), followed by "What Happened to Monday", a dystopian sci-fi thriller by Tommy Wirkola, with 52,781 (3.41%), itself down two places from last weekend. The American drama "The Florida Project" and biopic "Only the Brave" both arrived last week to 126 and 301 screens respectively; Sean Baker's "The Florida Project" received 23,038 admissions (1.51%) in support, and Joseph Kosinski's biographical drama opened its Korean account with just under 21,000 admissions (1.29%).

The final place went to Steven Spielberg's political thriller "The Post" starring Meryl Streep and Tom Hanks. The film, which was nominated for Best Picture and Best Actress at the Oscars, added 14,693 admissions (0.93%) from 128 screens to move its bottom line in Korea now to $826,031 (111,606 admissions).