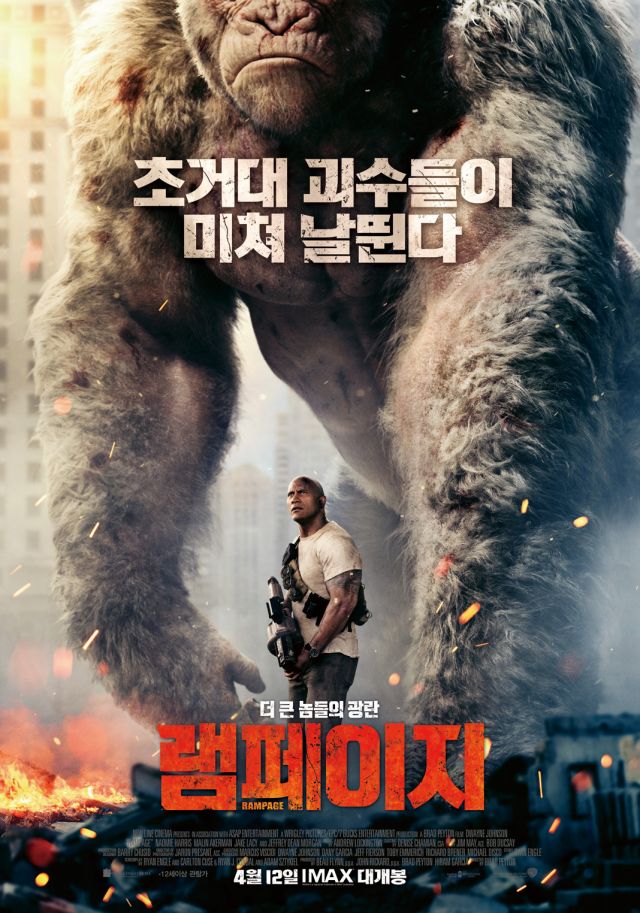 Jeong Beom-sik's sleeper hit "Gonjiam: Haunted Asylum" was denied a third-straight week at the top of the pile with the arrival of "Rampage" and John Krasinski's "A Quiet Place". Based on the video game series by Midway, "Rampage" follows a primatologist (Dwayne "The Rock" Johnson) and an albino gorilla who, due to rogue experiments by a greedy genetics company, grows to King Kong proportions. The film arrived in Korea last Thursday and claimed pole position over the weekend with 608,122 admissions ($4.9 million, or 35.19%) from 909 screens.

"A Quiet Place" is a low-budget horror starring Emily Blunt and John Krasinski that sees humans overthrown at the top of the food chain by superior creatures. Produced for just $17 million, the film has already grossed $151.3 million worldwide; in Korea, its first weekend out yielded 207,454 admissions (12.17%) from 677 screens and narrowly outplayed Steven Spielberg's latest, "Ready Player One" (which is based on the popular novel of the same name by Ernest Cline). With the 191,430 admissions (11.59%) Spielberg's new adventure garnered, "Ready Player One" has now grossed $16.9 million from just over 2 million admissions. Since its international released late last month, this sci-fi adventure film has now grossed nearly half a billion dollars. The highest local film was up next.

Lee Byeong-heon-I's fourth film, "What a Man Wants" starring Lee Sung-min, Shin Ha-kyun, Song Ji-hyo and Lee El, was down two places at fourth with just 10.83% of the sales (185,854 admissions, or $1.5 million). Set on the beautiful Jeju Island, Lee's comedy drama follows four people in search of true love on the gorgeous and gusty island. Since its release on April 5th, "What a Man Wants" has earned $7.6 million from a million admissions.

In his recent review of last weekend's number on Koreanfilm.org, film critic Kyu Hyun Kim wrote that "Gonjiam: Haunted Asylum" showcases "Jeong's considerable prowess as a horror specialist". Since its release late March, this minimalist horror has surprised by grossing $19.1 million from 2.5 million admissions, 166,139 admissions (9.54%) of which came from this past weekend. Around 20,000 stubs behind "Gonjiam" entered "Intention", a documentary that presents a scientific account of the sinking of the Sewol Ferry. The film had 569 screens around the country to pool from and attracted 8.25% of the weekend sales: 145,809 admissions, or $1.1 million.

"Stand By Me", a family drama by director Bang Soo-in, her directing/screenwriting debut, slid three places to seventh with 51,644 admissions (2.67%), followed by "Snatch Up", a new local action thriller by Heo Joon-hyeong, another debutant. "Snatch Up" scored just 27,364 admissions (1.49%) from 463 screens. The final two places went to "Spark: A Space Tail" and "Be with You" earning 24,595 admissions (1.21%) and 21,716 admissions (1.21%) respectively. Lee Jang-hoon-I 's "Be with You" has been active in the charts since mid-March; with this weekend's tally considered, "Be with You" is currently the sixth highest-grossing film of the year with 2.5 million admissions ($19.2 million).