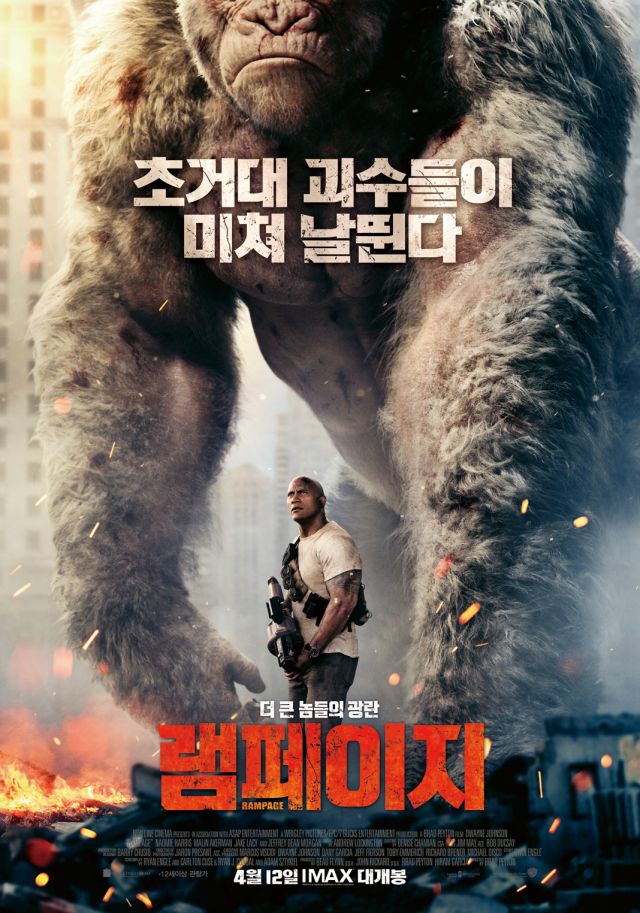 The Rock's "Rampage" remained unmoved at the top of the pile over the second last weekend of April. The film, based on the classic video game by Midway Games, arrived in the Land of the Morning Calm two weeks ago. From 886 screens nationwide, "Rampage" claimed 34.17% of the sales (363,703 admissions, or $3 million) and moved its total tally to 1.2 million: $10.2 million. Worldwide, director Brad Peyton's action adventure film has earned just over a quarter of a billion US dollars (the film was produced for $120 million).

Last weekend, Kim Ji-young-V's 110-minute documentary "Intention" about the Sewol Ferry sinking entered the fray in sixth with 8.25% of the sales. Week two, however, saw it move to second in the list. Kim's documentary, a data-driven, scientific analysis of the tragedy, enjoyed a screen boost and attracted another 108,961 admissions (10%). With this week's figures added, "Intention" has made just over $3 million from 385,431 admissions. Kim's debut documentary only narrowly outplayed last weekend's number two, "A Quiet Place" by director John Krasinski.

Produced for between $17 to $21 million, Krasinski's critically acclaimed horror has already grossed over ten times that sum globally. In Korea, the film has banked $3.7 million, $933,280 (108,761 admissions) of which came from this past weekend. With around 20,000 admissions less was Steven Spielberg's hi-tech adventure "Ready Player One" (an adaptation of Ernest Cline's 2011 novel of the same name). From 502 screens, Spielberg's latest cinematic creation found another 97,755 admissions (10%) during its fourth week out in Korea, securing fourth place and moving its total earnings now to $18.3 million (2.2 million). Currently, the film has grossed over half a billion US dollars worldwide. The highest new release was up next.

The French animation "The Jungle Bunch" entered in eighth with 28,462 admissions (2.38%) from 331 screens, closely followed by Bang Soo-in's family drama "Stand By Me" with Lee Soon-jae and Jung Ji-hoon. "Stand By Me" has been active in the charts since early April, and with the 24,189 admissions it scored over the weekend, Bang's debut has now earned $2 million from 292,746 admissions. The final place went to a new release from America. Christian Gudegast's heist film "Den of Thieves" found 16,397 admissions (1.48%) from 348 screens to round off the weekend's top performers.