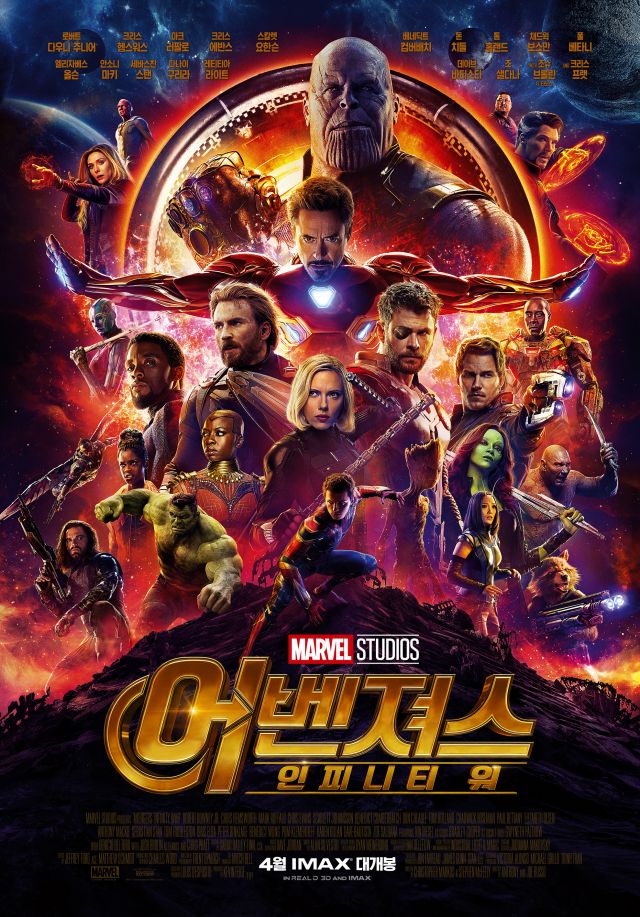 Marvel's "Avengers: Infinity War", one of the most anticipated films of the year, hit Korea last Wednesday across a massive 2,553 screens nationwide. The nineteenth film in the so-called Marvel Cinematic Universe (MCU), which began with "Iron Man" almost exactly a decade ago, captured an unprecedented 95.11% of the sales over the last weekend of April.

Despite some concerns over the official Korean subtitles, "Infinity War" attracted an incredible 3.1 million admissions ($27.7 million) during its opening weekend. According to The Hollywood Reporter, the film's opening was South Korea's highest ever. Currently, the film is already the fourth highest grossing film of the year with a total of 5.2 million admissions, or $44 million; "1987: When the Day Comes" (5.2 million), "Black Panther" (5.3 million), and "Along With the Gods: The Two World" (5.8 million) are currently third, second and first respectively. Worldwide, "Avengers: Infinity War" enjoyed the largest opening of all time, surpassing last year's high-octane action flick, "The Fate of the Furious"'s $541 million.

All other films this week claimed a percent or less of the total sales, starting with Kim Ji-young-V's documentary, "Intention", in second. The sinking of MV Sewol in 2014 took the lives of 299 people (most of whom were secondary students) and sparked lasting public outrage and multiple investigations. In this film, Kim presents a scientific analysis of the tragedy in order to uncover the cause of the ferry's sinking. Released mid-April, "Intention" has so far attracted 476,207 admissions ($3.6 million), just 38,100 (1.05%) of which came from this past weekend.

"Leo Da Vinci: Mission Mona Lisa", an Italian animation by director Sergio Manfio, was released in its home country bacon January, but the film only recently arrived in The Land of the Morning Calm and found 16,527 admissions (0.43%) from just 150 screens. Similarly, Nitesh Tiwari's "Dangal" (2016), a popular biopic from India, only now came to Korean screens. The multi-awarding-winning film scored 12,575 admissions (0.34%) from 252 screens, followed by the John Krasinski's low-budget hit horror, "A Quiet Place" starring Emily Blunt alongside the director himself (who are wife and husband in real life). "A Quiet Place" was produced for between $17 ~ $21 million, but since its released in American early April, the horror has grossed an impressive $235.4 million worldwide. In Korea, and with the 11,880 stubs (0.34%) it scored here, Krasinski's horror has now earned $4.1 million.