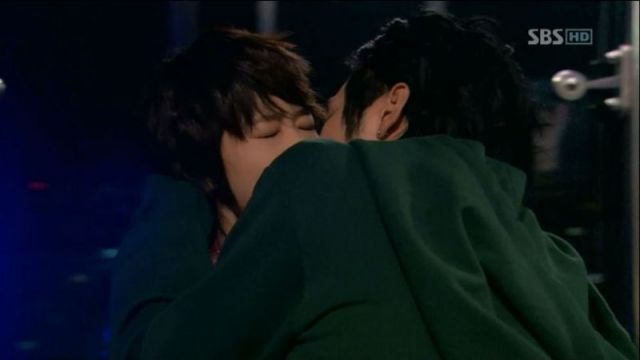 Last week, we took a look at some of the types of kisses in Korean drama in '[HanCinema's Column] Kdrama Kiss Types - Part 1'. From dead fish faces to the satisfying passionate smooching, actors have different approaches to kissing and different levels of involvement. Some try, some don't, but we can't forget about the fact that how a kiss looks or is even acted does not solely rest at the hands (or rather lips) of the cast themselves.

There are actors who seem fine with kissing in one series and then won't try at all in another. Clearly, the type of kiss depends a lot on the actual creators behind the camera and writing too. Writing aside, there are some quite common ways in which some kisses are not really aided in the romance department by the directors and editors. So let us take a look at those, along with the refreshing ultimate kissing type.

The Far and Away

Have you ever been a third wheel during an outing? Your couple-friends might sometimes get a bit too close for (your) comfort, so you give them some space. The camera work in kdrama feels like a third wheel sometimes. Just as the kissing is getting interesting and mouths are about to open, it goes away and briefly stares from a distance.

If she can handle that kiss with a heart condition, we'll be just fine, camera.

The Sun in My Eyes

Also shown in the previous piece, ruining a very good kiss in "Lie to Me", this is when a sun, light, sign, pillar or other object seems dead set on ruining our visual access to the kiss, lest the burning passion turns us all into putty. Too bad they don't realize that is exactly what we want. That's kind of why we're into romantic dramas in the first place.

Look at that pretty water. You have no choice in the matter anyway.

The Merry Go Round

There are kisses so great they can make you dizzy. Most kisses in kdrama, however, are not those great kisses. So they need some help. Enter the orbital shot. The camera will go round and round, sometimes even changing direction for extra dizziness. Anything to keep you awake during the glorified lip bump.

This kiss was so horrible, the camera had to switch direction midway to hide it.

We've all been there. We've been hugging pillows and squeezing body parts waiting for that moment when the romance will be sealed with a kiss. The approach is starting and we can't wait to see that lip lock. But we won't. At least not for long. We'll look at someone's cheek or back of the head instead. Pray for good skin or shiny hair.

She has good skin, he has shiny hair, we're all set here.

Repetition to the point of frustration is not uncommon in Korean drama. Flashbacks happen a lot, sometimes even to remind us of what we saw a few minutes ago. But when that reaches kissing scenes, it is extra painful. Nothing ruins momentum and immersion more than seeing the approach 5 times, sometimes in different takes and with obvious visual inconsistencies.

4 repeats of the approach, 2 of the lip lock. Sports matches get less instant replay.

While the "Finally" kiss is usually ruined by some element or other, the 'Ultimate' one is the absolute kiss. The actors have chemistry, they both know how lovers kiss, there is nothing obscuring our view, the camera does not run away or stutter and is instead focusing where it should. The hotness of that kiss.

Both actors are mentally present, the camera shows the good stuff.

Dramaland will do good to remember its series are mostly 15+ and featuring many far more harmful to young minds things than skinship between consenting adults. Despite the focus of these two pieces on mostly the silly types of kisses though, there are many who get it right. While we criticize the failures, we can draw joy from the fact that there are also a lot of good romances out there and that things are at least showing signs of slowly getting better.

* For the sake of smoother browsing, I did not make animated gifs out of the images. Here is a list of where they can be found.

"You're Beautiful": Episode 14, about half-way in.

'Operation Proposal': Episode 11, about 15 minutes in.