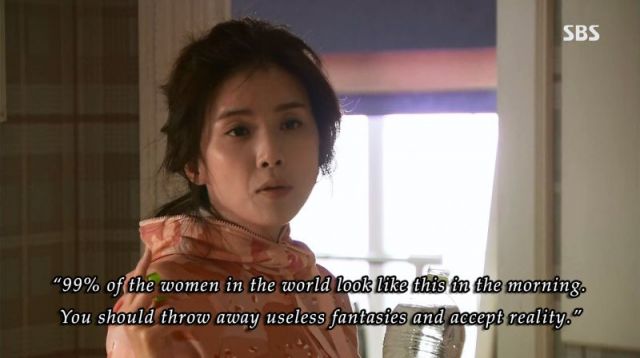 In my previous piece about strong female characters in Korean drama ([HanCinema's Column] Strong Drama Women - The Norm), I talked about how the main female characters found in series, particularly of the romantic genre, suffer from gender stereotypes and trope limitations. This is not to say, however, that other types of female characters are not found. Be it in main, secondary or supporting roles, they are there. The question is, how are they presented? In order to consider their existence significant as viewers, it has to be considered significant by their creators and conveyed as such.

But in order to find the characters with potential, realized and unrealized, we have to give 'strong' a definition. The problem with the word itself is that it can give the wrong idea about the type of character we are talking about. 'Strong' is not necessarily a personality trait of the character as a fictional person. By saying 'strong female character', I do not mean just brave, tough, feisty women with good jobs, positions of power and money. Those women are "strong" within the world they exist. Now, while this is one type of strong women worth mentioning, their strength is often skin-deep and would more likely discourage women from aspiring to be like them.

Think about rich and powerful (to a degree above lower/middle class) women in Korean drama. How many of those are leads? How many get to keep that power and earn respect? How many remain clear-headed at the presence of the man they like? And how many start off and remain as positive characters to be liked? Seong-joo of "When A Man's in Love" was a rich, confident and self-made woman. But she turned psychotic the minute "her man" rejected her. Everything which made her admirable was shown as insignificant, because when it came down to it, she was just a weak petty person who was ruled by her womanhood and need for a man. And that weakness was not even the focus. It was just used to turn her into the annoying second female lead out to foil the main couple's love.

Then think about older women with high positions, such as Chairwomen of companies. How many of them are likable and how many are the evil witches who cause trouble for one of the leads? "Miranda" of 'Marry Him If You Dare' is supposedly a woman who built and maintained a successful company, yet she is shown as irrational, a bad decision maker and someone who bases her actions on fortune telling and personal grudges.

So this is not the type of 'strong' which is really designed for everyday women to look up to and relate to. It is a different definition of 'strong' which often ends up, intentionally or not, belittling women and their emotions, principles and capabilities.

So what type of 'strong' characters am I talking about? I am talking about characters who are written well and with more focus on them than most dramas spare. Strongly written, well-developed and treated with respect. Here are three types I find to be just that.

1. Characters who are important to women for things beyond/in addition to their romances.

Now, this does not mean these characters do not have romances. A romance in itself does not a shallow character make. Romance is a big part of life and great for character development, even if its potential is often lost in Korean drama. What I mean by this type is characters who share the sorrows, joys, challenges and emotions of real women, in a way that viewers can connect to, not just as a part of their character description and role. Career, survival, relationships (not just romantic ones), health, financial status, gender-based issues, there are so many things women in Korea and elsewhere experience. Characters who have good enough development, dreams and goals on those parts of life are, to me, strong. Whether they also have a romance or not.

2. Characters who are the true leads, the focus.

Quite often in romantic drama, while there are two main leads, the man is the one getting the most focus and the most detailed storyline and development. The leading female often feels like an addition, a second protagonist, there to be won over by the male lead and make him happy. There are few series where both leads are given equal treatment and focus and even fewer where the woman's story is the one that is the most interesting and the one that matters most.

Whether the character is a main one, secondary one, a bad or good person, strong or weak (as a human), it comes down to one thing. How much they are respected and treated like important human beings. How nuanced and detailed they are, how captivating to watch. They can be bubbly, they can be pathetic, they can be weak, strong, ugly, pretty, old, young. It does not matter. What matters is that they are given the attention they deserve for their role in the story.

There are characters who do have that potential, but are often pushed aside in favor of the same stereotypes that lead the stories or, even worse, are reduced to stereotypes themselves, when they become more interesting than said leads. One such example, also from 'Marry Him If You Dare' is the character of Yoo-kyeong. She is facing the struggles of being a beautiful woman in show business. Objectification, lack of respect, being judged only as a decoration and denied choice are very real problems women face. But her potential is left unrealized. She eventually becomes what her role pigeonholes women into. An obstacle for the ones in love, her struggles turned into an element for melodrama and romance, making their importance insignificant beyond the scope of what they can accomplish for the love lines.

Which brings us to the good things. Yes, the above example is a common way in which intriguing characters are dismissed in Korean drama, but there is a flip side. There is always a flip side. While to a different degree and in different types of roles, meeting different combinations of the criteria I wrote about, strong female characters can be found in Korean drama. In the next piece of this trio on strong drama women, we will take a look at a few examples of the different types of characters which can be found, using the definition given here.