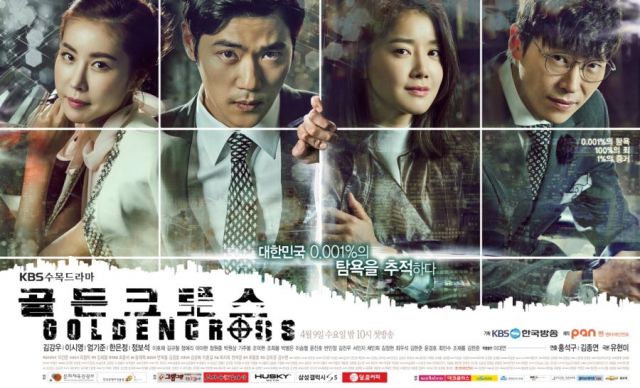 After a series of rating failures and poor handling of their dramas' plots, KBS is having another go at things with 'Golden Cross'. With a typical melodrama plot and a cast of talented actors, the series does not sound like something fresh, but perhaps the road most traveled will be helpful in getting out of the slump they have gotten themselves into.

Kang Do-yoon (Kim Kang-woo) decides to take revenge upon a top economic society and the man who killed his sister and destroyed his family. In the process, he forms a bond with Seo I-re (Lee Si-young), a prosecutor who is also the daughter of the man he is after (Jung Bo-suk). While no channel really has an exclusivity in bad output, KBS has not been doing so well lately. From production problems to low ratings, it has been having a lot of issues. A bad season might bring about more bad ratings-boosting decisions and from the side of the audience, prejudice and hesitation. Hopefully, KBS can prove itself again and produce a good work that does well without being too tampered with.

Melodrama is not exactly the most innovative genre in Korean drama and revenge is the standard premise for it, but a lead's family getting killed by someone powerful after which they fall in love with a person related to the wrong-doer or some of the wrong-doers is as effortless as one can get. While even the most cliché-sounding plots can work, showing lack of inspiration so early on is not encouraging. Having written the hit drama 'Bridal Mask' back in 2012, Yoon might just be the channel's attempt at regaining some of its former glory. Given her good work in that drama, they may be trying to go for that quality again, despite the premise of 'Golden Cross' not sounding so exciting at the moment.

While the series will be up against dramas which sound like they will be quite popular, its genre can help quality-wise. Low ratings can still bring unwanted changes, but makjang elements fit better within an already tone-appropriate for them genre. A lot can still go wrong, but rather than having romantic comedies turned into melodramas or fresh premises ruined, this might mean less changes and interfering.

The cast of 'Golden Cross' is quite interesting, its promotional material looks like it will go for intensity and the writer is probably its biggest selling point at the moment. As boring as its premise sounds, good writing can go a long way, if only the writer will be allowed to follow their vision. A lot will depend on ratings and how willing KBS is to finally let a series run its full course in peace.