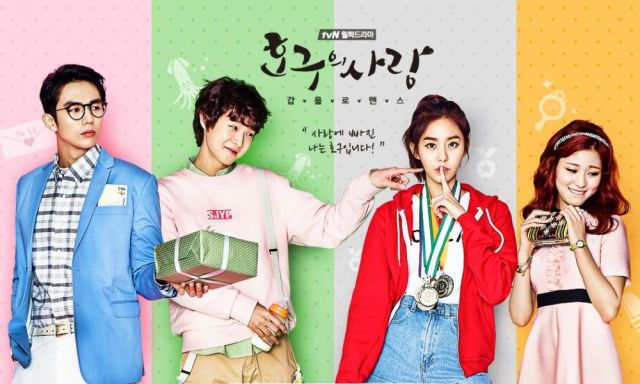 TvN has made a beloved genre out of its light and youthful romantic comedies. They have humor, likable young and older stars, good production value and they offer all the things viewers love about the pure version of these dramas. 'Hogu's Love' follows the same formula of upbeat quirkiness, but switches enough things around to potentially be quite a little unique show of its own.

Kang Ho-goo (Choi Wooshik) is a silly and cheerful man who has been trying to pass his civil service exam for years. Do Do-hee (UEE) is very different from Ho-goo, a swimming champion with a graceful look, but mean temperament. Ho-goo finds himself a complete fool in love for Do-hee and their complicated romance begins. Dramas with a male lead who is not a cold, arrogant and in some way powerful man do exist, but they are rare. There is a false association of passion and force in romantic fiction and this means the archetype of a rich jerk sells. Shows with a nice guy leading have done well before and Choi Wooshik is a beloved actor, but whether Ho-goo will appeal to audiences as a romantic lead and not just a goofy underdog is uncertain.

Lack of a Hook

The romantic comedy genre used to be a lot simpler in previous years, but at a point where viewers are used to even this having gimmicks, mysteries and intrigue, 'Hogu's Love' feels almost boring in comparison. The show looks like simply a romance one and while the characters seem interesting and there is a part of the premise which will surely be different, it is still not a very catchy starting point. Writer Yoon Nan-joong is known for hit tvN drama 'Flower Boy Ramyun Shop' and 'Hogu's Love' is based on a web comic by the creator of 'Flower Boy Next Door', Yoo Hyeon-sook. This is already a promising combination for the genre, but adding to that is PD Pyo Min-soo, who is perhaps most known among rom-com fans for his work in "Full House", "Coffee House" and "Heartstrings". With such names involved and this being on cable, there is reason to be excited.

Having a foolish and good-natured male lead and a tougher female lead might not be everyone's cup of tea and is certainly outside the norm, but it is also a reversal with great potential. There are always viewers who prefer what they are used to, but there are also those who want something fresh. Story-wise, it can also offer audiences an interesting and different perspective on relationships and gender roles.

'Hogu's Love' is looking like a relaxing, cute and feel-good show for those looking for something light and fun. With a refreshing young cast and the potential to have some warmth and handle characters which are slightly different than the usual, it might be a nice break from the two previous and heavier shows of its timeslot.

'Hogu's Love' begins its run on February 9th and will air every Monday and Tuesday at 23:00, on tvN.