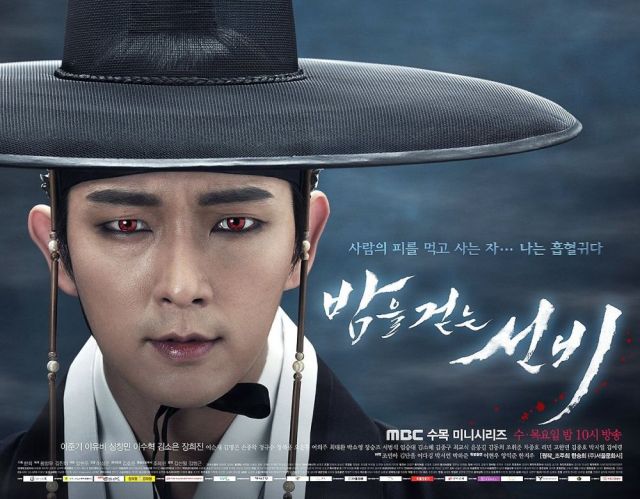 It is truly the age of manhwa, webtoon and novel adaptations, and we have another one coming. MBC's 'Scholar Who Walks the Night' is based on a manhwa of the same name and it is a fantasy period piece involving revenge, gender bending and vampires. It sounds like a lot to deal with, but the drama will hopefully do it well and bring some summer entertainment.

After her father has been framed for treason, Jo Yang-seon (Lee Yu-bi) disguises herself as a man in order to sell books. One day she meets Kim Seong-yeol (Lee Joon-gi), who happens to be vampire. Enter past loves, evil vampire antagonists and all manner of conflict will ensue. It is one thing to mentally accept a period piece about a vampire. It is much harder to process a vampire, cross-dressing and the misunderstandings that usually follow, amnesiac doppelgangers of long lost loves, evil friend-biting vampires and probably more. There is so much, too much going on with the premise and that can easily lead to a messy show trying to juggle everything. It also starts sounding a bit too silly, given disbelief has to be suspended a lot to cope with it all.

The series features a well known and Hallyu-friendly cast. It is based on an existing and beloved original work and its very topic is one which would satisfy audiences just looking for some entertainment. All of these things might sound great, but they might also mean that the production will feel secure about its financial success and not really try that hard to make a good story. This has happened before, there is no reason to assume this series will be any different. While the popular cast might be detrimental to the story if their presence guarantees sales and the creators are not willing to bother, it is at the same time a crowd-pleasing one. Most of the main cast has made interesting and sometimes even great choices in the past, they each have their own level of experience and they seem like they would fit the type of roles given to them here. If the writing is decent, the cast is one many will be happy to see deliver it.

As messy as the premise sounds at the moment, it can also be used to the drama's advantage later on. By having so many subplots and characters who are connected in different ways, the creators can choose what to show and when, and they have something to fill time with, which is related to the story. If there are changes down the road that necessitate padding of the plot, there is already a lot of material there to keep things going and still relevant.

'Scholar Who Walks the Night' sounds like just the thing for a summer show. A lot of action, nice sets and wardrobe, pretty men with terrible afflictions, romance, intrigue, conflict. Sounding great and being great are worlds apart, but this might be quite an enjoyable drama if the production is serious about the quality of it and does not only rely on its marketable concept and cast.

'Scholar Who Walks the Night' begins its run on July 8th and will air every Wednesday and Thursday at 22:00, on MBC.