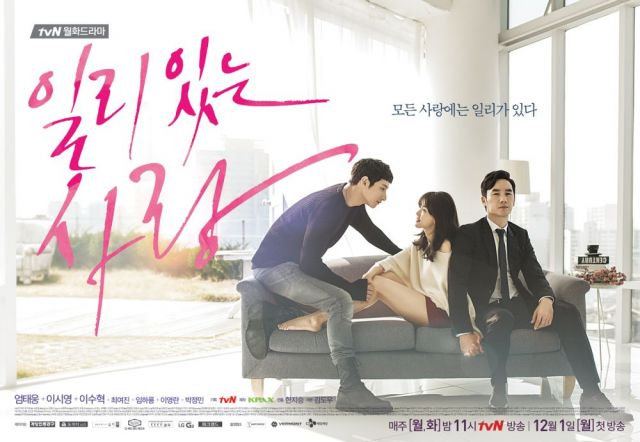 Extramarital affairs are not a happy topic for anyone involved. However, as it is a very common issue in any society, it is one worth exploring. The problem is that the nature of entertainment is to be what the word implies; entertaining. This can make it present such topics with lack of the necessary depth and respect. TvN's 'Sensible Love' or 'Valid Love' is therefore a gamble.

Jang Hee-tae (Uhm Tae-woong) and Kim Il-ri (Lee Si-young) are a married couple who met as teacher and student. Despite Il-ri feeling like she loves her husband, she is shaken by a young man who enters her life, called Kim Joon (Lee Soo-hyuk). Il-ri finds herself in love with both men. As mentioned, this topic is not a light one. Korean dramas tend to be quite conservative and way too forgiving of flawed characters for the sake of audience satisfaction. The topic is also one which requires a more mature approach than often offered. Having a progressive and morally consistent take on it will be tricky.

Lust is a temptation that sells

As productions need to make money, they tend to utilize their most catchy elements. In this case, focusing too much on racy and carnal side of the attraction is a possibility. Rather than focusing on exploring the characters, the series could end up selling melodrama and conflict for the sake of excitement alone. Uhm Tae-woong is a beloved actor and a good one. Lee Si-young has also stepped up her efforts and done some darker works, expanding her repertoire and showing she can handle drama well. Lee Soo-hyuk has been steadily climbing up the acting and popularity ladder and has the charisma to carry the role of the lover and hopefully the skills as well.

Promising previews and focus on emotions

For one, this is a tvN show, meaning it is less bound by conservative propriety than the dramas on government owned public channels. This can be good for a focus less on the soapy parts and more on character exploration. The preview materials also show a focus on the relationships and not much in the way of selling "a naughty affair".

'Sensible Love' can end up a sob story with messy morals. Maybe being on cable television will not help. However, what has been released about it so far looks good. The show is written by Kim Do-woo, who has also worked on 'My Name is Kim Sam-soon', 'Fox, What Are You Doing ??' and 'Me Too, Flower!' and its PD Han Ji-seung has experience too, which inspires a level of trust in terms of them managing their material.