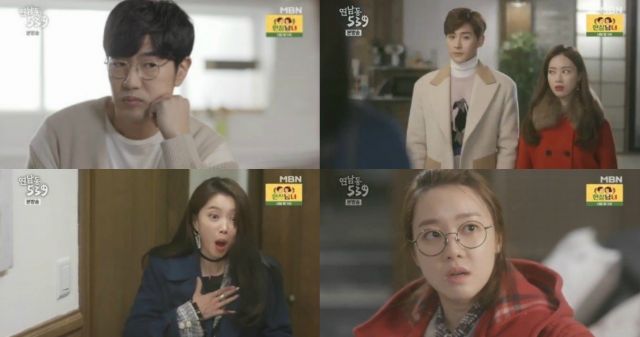 I-na (played by Oh Yoon-ah) is the recently arrived manager of a local chain fitness center. Soo-ri (played by Yang Jung-won) is her generally sexy subordinate yoga instructor. While the physical attractiveness of Soo-ri in the first episode was relatively subdued, the second episode turns it up so much as to be in poor taste. The production team is sending a mixed message by saying that uploading sexy pictures of Yang Jung-won on the Internet is wrong, and then giving us an entire setpiece where she moans lasciviously in response to a massage.

It would help if we got more sexy exposition of her co-worker Tae-yeong (played by Choi Woo-hyuk-II) but alas, the man has yet to find any excuses to take his shirt off. Anyway! Let's get on to the subject of what all these characters have to do with each other in the first place. They all live in the same house. The reasons are entirely pragmatic. Sea captain Jordan (played by Lee Moon-shik) doesn't ask for a deposit, just that the tenants all follow a few arbitrary rules.

The tenants are supposed to form a makeshift family. So "539 Yeonnam-dong" has a boarding house premise, with the odd snag that Jordan, Bong-tae, and I-na are all a little old to be living in a boarding house. Could this perhaps be a social commentary on the nature of the South Korean housing market, that it forces even people with established careers into student style living situations because those are the only kinds of living spaces available on short notice at a reasonable price?

I'm reluctant to give "539 Yeonnam-dong" that much credit, mostly because the aggressive soundtrack is making it very difficult to interpret the drama in terms of subtlety. Which is a shame, because most of the best jokes work that way entirely thanks to subtlety. I liked the one where a character reflexively gives an honest answer to a question from a client, completely failing to notice that doing so goes against her business interests.

Another matter of mild annoyance- while Bong-tae's investigation in the first episode was self-contained, this time, it's going to spill over into the third episode. Granted, the drama still had to introduce everyone and more fully explain the premise. Everyone has now been formally introduced to Do-hee (played by Go Na-eun), the desperate bespectacled job-seeker. But aside from the moderately amusing setpiece where Do-hee acquires the room, she doesn't do much either.