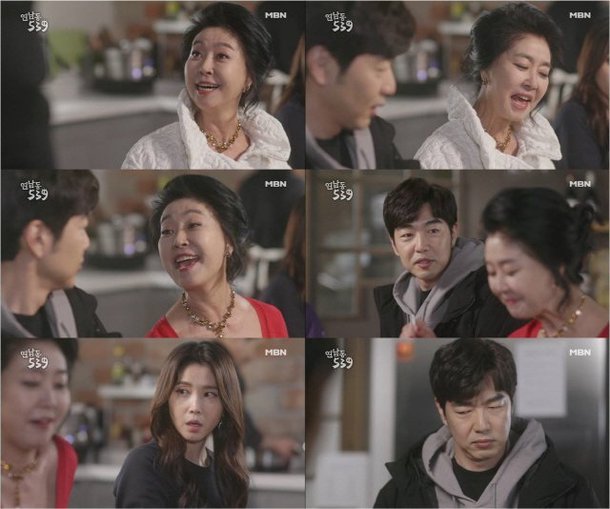 So apparently that whole hospital scene that I thought was a cliffhanger was actually just the framing device for this episode. It did not, as has been implied, have any relation with the events of the previous episode. I really don't like these kinds of editing gimmicks. You can't just do a dramatic cliffhanger like that out of nowhere, there has to be some level of build-up first or the whole thing just comes off like a cheap trick.

Anyway! Here we meet I-na's mother Soo-mi (played by Oh Yoon-ah). Seeing Soo-mi I can better understand what the purpose of Jordan's son was. "539 Yeonnam-dong" is establishing why it is that all these people would rather live with strangers than with family. It is because their family members are really annoying, yet all of the members of the share house like human social interaction. They just prefer mild situational annoyance to constant aggressive annoyance.

I'm really digging the nautical mutilation subplot, for example. On one end, it's funny that these younger guys think they can get away with stealing food just because it's in an aquarium. Just buy your own dudes, it's communal! On the other end it feels fundamentally ridiculous that I'm sad about the poor octopus losing its tentacles when, like, that animal's going to die no matter what. The surprise is mainly just that everyone is so nonchalant about how they're briefly keeping sea creatures as pets prior to eating them.

In more relevant story matters, the Do-hee busking storyline is going strong. I had not noticed that she swiped Ryan's guitar, although really, it was pretty inevitable that they were going to have to team up at some point once Do-hee started singing. There's not really very much to this storyline, or really any of the storylines in this drama. They're all just simple, well-done characters arcs with strong continuity and moderately amusing situational gags.

The only real problem is that they're all subplots, in a drama with no apparent main plot. Bong-tae's latest cybercrimes investigation ends up appearing rather late, and ends right when something interesting is about to happen. Now that's how you do a cliffhanger correctly- well, maybe. The preview gives the indication that we're not actually going to spend that much time at the amusement park, although I welcome the prospect of finding out more about I-na's daughter.