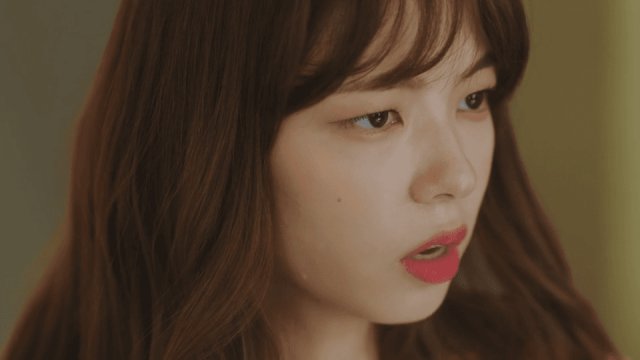 The second story of "Adult Trainee" isn't quite self-contained. Or at least, the end of the fourth episode was way more ambiguous than the one at the end of the second episode. But more importantly the story in general is a lot less interesting. Yoo-ra (played by Jo Yoo-jung) is a high school student who's still nursing her pride from a nasty breakup. So for somewhat convoluted reasons, she enlists the aide of her longtime friend Nam-ho (played by Ryeoun) to pretend to be her boyfriend.

Eye-rollingly common as this cliche may be, there are a few interesting snags to this premise. Nam-ho has known Yoo-ra for quite some time- and throughout all that time, Nam-ho has consistently been rude to Yoo-ra. Nam-ho is a talented athlete, with a comically buff physique. It's also implied he has had his fair share of girlfriends. So the existing relationship between Yoo-ra and Nam-ho is quite functional. They know where they stand with each other, and are fairly good at communicating.

There's also a worthwhile explanation for Yoo-ra's behavior, when she can finally bring herself to open up to Nam-ho about it. What bothers Yoo-ra about her first failed relationship was that it just didn't seem like a big deal- not to her, and not to him. This is frustrating because Yoo-ra was taking it seriously. Her first love's lack of emotional attachment disgusts Yoo-ra- possibly more as a self-reflection than she's willing to admit.

I have to qualify that with a "possibly" because "Adult Trainee" doesn't actually delve into the subject very satisfactorily. For most these two episodes of "Adult Trainee" just feature Yoo-ra and Nam-ho going out on fake dates and even a fake overnight trip for the sake of keeping up appearances. Though convincing friends, Jo Yoo-jung and Ryeoun don't have good chemistry as lovers. While they look like high school students, they don't really act like them. There's too much of a try-hard element.