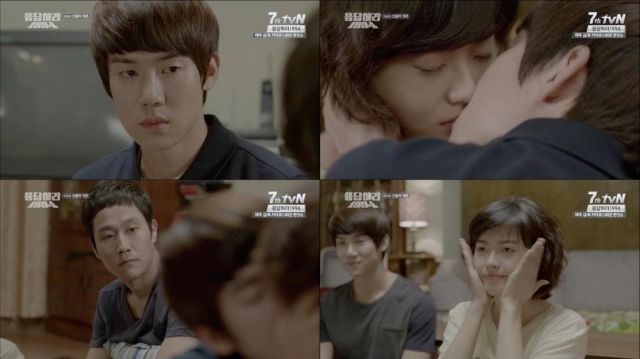 The broader theme of this episode is fatherhood. Sung Dong-il is a dad to all the college-age boys living in his house- and not in the easy categories of strict dad or fun dad. He's the kind of dad who demands the very best from his surrogate sons because he knows they can deliver. Even when Sung Dong-il ends up getting more than he bargained for, there's always that same front that really emphasizes how much he cares.

Sung Dong-il is not a perfect dad, or for that matter even a perfect husband. But because he's always trying to do better, and trying to help everyone else do better, the characterization is quite sympathetic. When an emotional event comes up and is eventually resolved, the feelings evoked are genuine ones. This episode represents a new dynamic in the surrogate family relationship, not so much because of the new plot development, but because of the familial way the unrelated men in the household react to it. We see this same sense of camraderie in the present day.

Time and tide is not quite so kind to other plot aspects. Two months have passed, and Rubbish's interplay with Na-jeong is mostly unchanged. Na-jeong's reactions, however, have changed from doe-eyed naivete to mild annoyance. It makes me discount the possibility that Rubbish is her future husband- at this point she treats him more like a sibling than a love interest. Rubbish's intents are not quite so clear

The hot summer weather is such that for the most part characters don't really do that much here, and the action is rather subdued. The comedy, while not uproarious, is still fairly effective. The closest we get to an extended setpiece this time is when we see all the college-aged youth play the King's Game, and learn its terrible secret- that it is actually a really, boring pointless game unless approached creatively. By the time something interesting finally happens everyone's too lethargic, drunk and disconnected to even notice.

The parting gag is fairly effective, too. There is, in fact, significance to the fact that two of the drama's time periods are 1994 and 2002. The event in question, unsurprisingly, makes a mockery both of Na-jeong and of the viewers at home. But then, some level of ribbing is necessary for this drama to achieve maximum impact. Really, we should be thankful. The drama did skip two months to get us to the next plot-critical stage instead of engaging in more wacky April adventures.

"Answer Me 1994" is directed by Sin Won-ho and written by Lee Woo-jeong-I and features Go Ara, Sung Dong-il, Lee Il-hwa and Jung Woo.