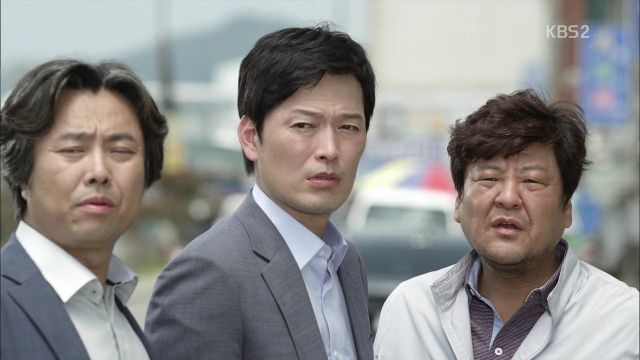 To say that the events of the second episode were a surprise would be a gross overstatement. While well played, they were so predictable that the episode was mundane. It followed the process behind Sang-pil's ascension to the National Assembly and the catalyst for the change in his attitude towards his new career in politics.

At this point in time, Sang-pil is no more than a pawn on the political chessboard . His passion for his cause and his family and friends drive him in an admirable way, but also make him weak to manipulation. Baek Do-hyung knows this and with a heavy conscience he uses Sang-pil and his junior In-gyeong to further his agenda. Baek is an interesting character, one who feels he is too far gone to make a change in his political morals and rules of functioning. He has compromised to get where he is and will continue to do so at the expense of others. It's the name of every political game, and "Assembly" hasn't proven whether it can depict that game properly or not.

In-gyeong is a woman who is equal in understanding as Baek of her nation's politics, but for whatever reason, time, circumstance, or her gender, she hasn't been able to do what she really wants: hold office. It will be interesting to see how she puts aside her ambitions (or not) to help Sang-pil, and how her back story will affect her behavior. She is more emotionally driven than Baek, and is imilar to Sang-pil save for the fact that she's much more familiar with politics and that has tempered her emotions' ability to take over he behavior.

Then we have Kim Gyu-hwan (Ok Taecyeon) who is the son of Sang-pil's beloved friend Bae Dal-soo. Gyu-hwan is motivated by his biological father's sad story and hopes to make the world a better place through his aspiration to be a cop. He is earnest and young and already has connections to both In-gyeong and Sang-pil in typical K-drama fashion. His father Dal-soo refuses to give into political pressure and take a deal. He wants the company who laid him off to accept him as a human being rather than treat him like a pawn. He is so emotionally driven that he can't see anything but his goal. He is furious at Sang-pil for giving in. His son follows in his footsteps which sets up a nice triangle between Gyu-hwan, Sang-pil and In-gyeong - they don't want to have dealings with each other, but they will have to.

Sang-pil is the man chosen to step into the political arena even though his entire life's experience is in blue collar work. He only does it to help his fellow workers and to do something about their situation. I really appreciate that he has no idea what he's doing and that In-gyeong tells him that. He has a lot to learn and he will face some extreme stumbling blocks in his attempt to achieve his goal. He has no interest and little enthusiasm for politics, but the catalyst of this episode may send him hurtling forward.

In the end, episode two was a whole lot of set up. It holds potential, but it was still quite slow. The politics were much cleared up. It's a battle for power using dangerous threats clothed in deceptive niceties. The use of Mozart's 40th Symphony as thematic material is quite potent. It is often used to amp up the angst because of its tonality and united upper strings that creates power in aural movement. I'm looking forward to seeing it used.