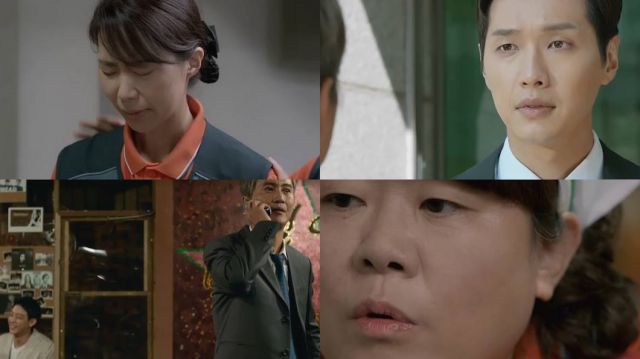 First off, don't watch the preview for this episode if it can be avoided. The episode nine preview spoils the cliffhanger. I really hate it when dramas do that. I want some idea what's coming up next with the preview, but spoiling the cliffhangers just makes me want to give up on previews altogether, because it makes me feel like I wasted my time watching the episode. Although even on merits "Awl" does struggle in that department.

Still, the entire labor hearing scene is fairly strong. Unlike corporate directed arbitration, government labor boards are pretty good about having clearly defined rules. And so this scene is where Go-sin really gets a moment to shine. He knows the rules, and it soon becomes obvious that the human resources branch of the grocery store doesn't actually have any idea what they're supposed to be doing. The longer the hearing goes on the more desperate their attempts at discrediting the union becomes.

Time and again it's pretty clear that the grocery store's management has never expected its employees to fight back. It's a notion by now that has gotten a little absurd. Did they seriously believe that Soo-in and all the other employees were just going to stand by patiently and quietly waiting to be dismissed? The very fact that they had to ask Soo-in way back in the first episode to start building a paper trail was in itself a tacit admission that sufficient evidence did not exist yet for them to fire all the staff.

But that's also the main problem with the labor hearing process, is that it takes time. And like a sore loser, the grocery store management can try to make life as difficult as possible for as many people as possible until the hammer finally comes down. For a sense of perspective, this is why union dues exist. They help to defray the personal expenses caused when low ranked employees have to get into these kinds of long-term financial battles.

So, once again, it's more of the usual from "Awl". Soo-in struggles with trying to direct the union when he has almost no personality. Go-sin encourages Soo-in with weirdly peppy advice. The bad guys sulk more than they actually manage to be all that villainous. Initially I wondered how "Awl" was going to tell such a complicated story with so few episodes, but it's become obvious at this point that the characters are more archetypes than individuals. So what we get from character arcs is pretty minimal.