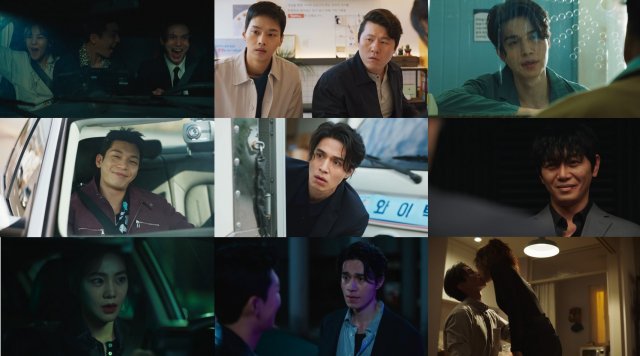 The hunt to take down Superintendent Kim concludes anticlimactically. There's surprisingly little drama or tension. Inspector Ryoo and Detective Lee have already pulled off the hard part by managing to brute force their way out of a locked truck. Then just as they've gotten started menacing their would be murderers with the giant truck, Patrolman Oh and Detective Yang (played by Cha Si-won) pop up, despite Inspector Ryoo's stated motivation to keep them out of this whole mess.

Character building moments like that really stand out- as does the visit that Inspector Ryoo makes to Detective Lee's apartment, where they almost immediately lapse into old habits. "Bad and Crazy" is surprisingly cute even when K isn't around. We only really see him in the comical follow-up to the initial locked in a truck scene. And while I can remember the agony Inspector Ryoo and K felt over being locked in the truck, I've completely lost track of the actual chain of the investigation that leads to Superintendent Kim's undoing.

As charming as that characterization may be, it really just underscores how the main story was running on fumes and making the episode feel a lot longer than it really was. Then we get to the post-script, which mainly just serves to establish that Inspector Ryoo is going to have to get some actual treatment for his split personality issues. But the whole scene at the psychologist's office is exceptionally and ominously cryptic.

Overall the episode misfires by trying to compartmentalize the criminal investigation and the character development angles of the story. Inspector Ryoo has always been a compelling character because his core conflict is being a corrupt cop who's that way more due to laziness than lacking any particular moral scruples. Overcoming that laziness through solid detective work is his main redemption. The action cop stuff is more like eye candy, but in this case it just didn't grab me.