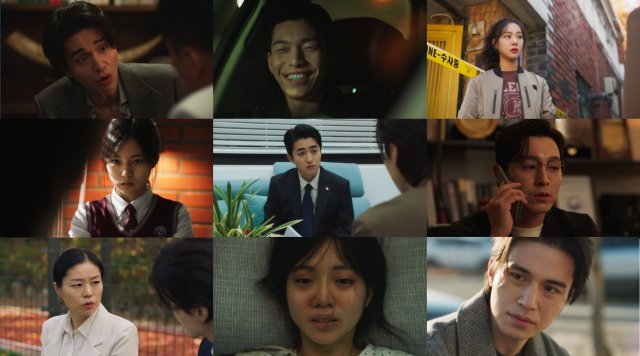 In a semi-episodic twist, this episode details the mysterious story of Yeong-joo (played by Park Seo-yeon), a high school student who appears to have murdered her abusive father. Inspector Ryoo and his crew of fellow detectives are investigating the case as if it's a one-off event. As they see it, Yeong-joo is only relevant to the extent that she's a possible source for their trying to locate the powerful drug that's been driving the narcotics trade of the previous storyline.

But similarities between Yeong-joo's experiences and those of Inspector Ryoo in his childhood are increasingly uneasy to shake. It's only at the end of the episode that Inspector Ryoo comes across indisputable evidence that Yeong-joo was trying to send him specifically a message. Yet everything up until that point is immensely foreboding. Multiple visits to the ominous hallway of his birth father's death are so unsettling that even K drops the sense of humor.

Then there's Joo-hyeok (played by Jung Sung-il-I), the psychiatrist whose professional demeanor makes Inspector Ryoo uncomfortable. To Inspector Ryoo's great awkwardness and frustration, he can't pinpoint why. On one end the coincidences that have lined up to put Joo-hyeok into contact with both Inspector Ryoo and Yeong-joo are too incredible to ignore. But then why does Joo-hyeok seem so helpful?

Then again that might not be as big a positive as it sounds. The major mysterious element of Yeong-joo's case is that it's rather paradoxically clean. Most murderers don't make videos addressed to nobody that both show them committing the evil deed as well as confessing to it. Yeong-joo in general is a disconcerting character to watch, because she always looks and acts like a puppet. Her own personal motive for wanting to murder her father is indisputable. Yet the entire situation is framed as a sick game.

The bigger overriding explanation for these events appears to be gaslighting. Which is to say, Yeong-joo was bewildered into committing these actions by persons unknown, who probably used the hot new mystery drug among other means to delude Yeong-joo into thinking she was in some nefarious dream world. I've long wondered why the ultimate villains of "Bad and Crazy" came from Russia, and it seems likely there's an actual explanation for that which likely ties into how and why Inspector Ryoo himself underwent a similar experience some twenty years ago. For now, though, the haze of mystery is gripping enough on its own.