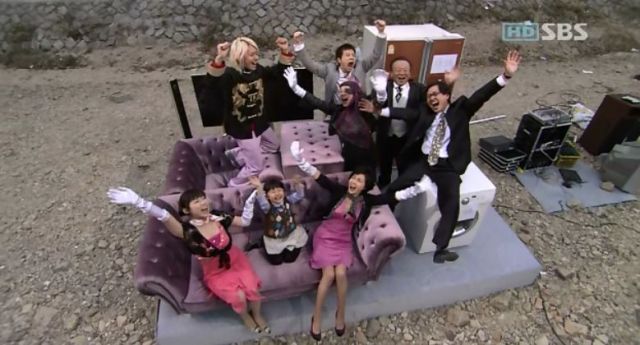 When it comes to the concept of family, Korean dramas usually go for a traditional approach. Biological nuclear families. The types of parents we see in them are also very few. Sometimes, they seem to be there just to oppose a union, nag and bring humor or then melodrama. But sometimes, a drama will step out of those tropes and offer something new. "Bad Family" is all about the most unconventional step-family one could imagine. It also turns out to be a great piece on what makes a family and what is important in human relationships.

When a little girl named Na-rim (Lee Young-yoo) loses her entire family in a car accident and suffers memory loss from it, her uncle hires Oh Dal-geon (Kim Myung-min), a man offering fake guests for weddings, to get together a fake family in order to not further shock Na-rim until her uncle can investigate the event that took his relatives' lives. Dal-geon finds his group of misfits and mostly forces them into the whole deal. There are two simple rules for this fake family. Presenting a harmonious and happy environment and no romance between members. Both of which the viewer just knows will be broken. The originality and message of "Bad Family" is what makes it such a pleasure to watch. It can be a tricky series to get into at the beginning. The characters do not really start off as anywhere near likable. In fact, they are all annoying, selfish, hostile and mostly do not care about anything besides getting their pay. Seeing Na-rim and sympathizing with her makes this a bit difficult, since the adults around her are not only deceiving her, they also could not care less about her to begin with.

But that is precisely the point. The characters are, for the first time in a long time or even their entire lives, forced to learn how to get along with others. How to compromise, offer support, handle responsibilities and learn to think and function outside of the scope of being alone against a bad world. Through that process, they find personal fulfillment and happiness in belonging to a group that needs everyone to exist. All of the characters have their stories and reasons for being as they are and the nice thing here is that all of them matter, both within the family, but also in terms of the plot and writing.

They all get their development, good characterization and enough time devoted to themselves and the relationships they form with each other. This is really an ensemble piece and it being a journey into what brings people together means anything less would have defeated the purpose. The chemistry between all the actors is great and with some very capable people being involved, this really gets the viewer emotionally invested in seeing the characters reach maturity and become the best they can be. Since this is a mix between romantic comedy and a family show, it is not heavy on the romance enough to match a pure rom-com. The romance is there and it is cute, but perhaps it will not be everyone's cup of tea if romance is what they mainly go for. But this is also not a long family series that those more into that genre follow. While this can make it a hard sell for those more into the two genres as they are usually found in Korean drama, it is also its biggest strength for those who like the essence or basic features of those genres, but perhaps not the tropes that are usually associated with them.

"Bad Family" is a very nice mixture of the two. Its warmth and the things it has to say about what achieving personal happiness means for a person and their loved ones and ultimately, its portrayal of what a true family is about are what make it unique and heartwarming. It is by no means a perfectly polished experience, neither is it an impressive or expensive production. However, in an industry where very few works have anything to say, "Bad Family" and its beautiful message are worth giving a chance to.