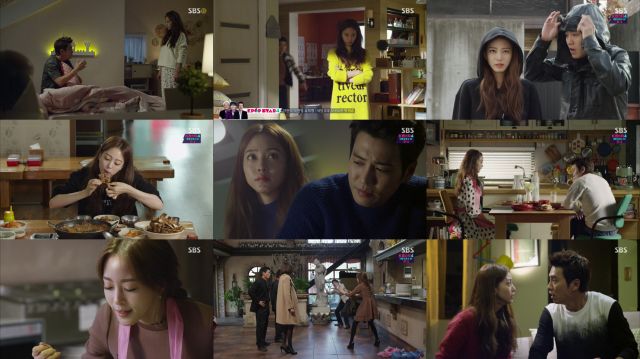 It took me a moment to realize what the purpose of the writing on the wall was given that Tae-hee and Geum-ran aren't actually aware of the main significant cause of the rift between Kang-joon and Chae-yeon. "Birth of a Beauty" manages to close most of the important information gaps by the end of the episode, so this isn't that big a deal, and for the most part, the plan remains intact. But fractures do appear, which means that the general humiliation of the villains probably isn't going to go on indefinitely.

Really the main miscalculation is on Tae-hee's part. His response in crisis was understandable, but the first reaction really should have been to put Chae-yeon on the defensive. She was unequivocally the person who acted disreputably and shamefully in that situation, and by not pressing her on this point, Tae-hee very clearly gave the impression that he's up to something. Tae-hee should have been the one asking questions- not Chae-yeon.

The other major flaw is quite a bit more silly. Sara ends up going viral. And as much as I'd like to attack the drama on improbability here practically the exact same practice was shown as being popular on "The Idle Mermaid", so it's totally believable that it could work here too. Han Ye-seul definitely deserves credit for selling the idea- she's got this perfect combination of being obviously attractive while also being completely unaware of it. Which is fitting, given Geum-ran's general character.

But even if the villains have made progress in discovering the real source of their problems, they make just as much backwards process by reacting poorly to the few problems they can actually identify. Even if Chae-yeon's plan had worked Kang-joon would have been outraged when he found out what happened. Likewise, Kang-joon's plan here carries significant risk given that his father had only just been informed that something rotten is going on in his family.

Consequently, even though the outline of the current plot trajectory seems ominous for Tae-hee and Geum-ran, they remain easy favorites to pull through to the end simply because they're functioning as an actual team. They're competent on their own, and hyper-competent when working together toward the same end- such that I'm genuinely curious how Geum-ran is going to react to the cliffhanger's revelation. Maybe she doesn't technically know this is a romantic comedy but come on. How many other interpretations are there?

"[HanCinema's Drama Review] "Birth of a Beauty" Episode 7"
by HanCinema is licensed under a Creative Commons Attribution-Share Alike 3.0 Unported License.