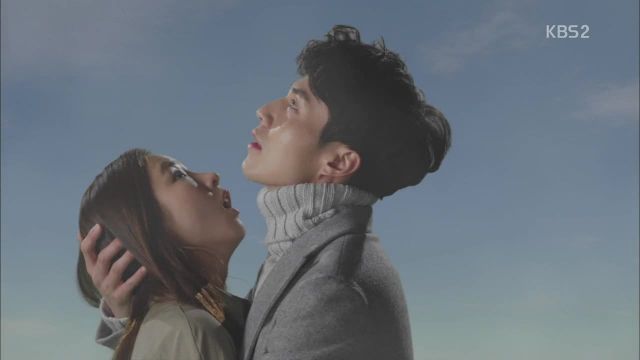 "Blade Man" has ended happily. All issues were resolved. All couples ended up together. Some of these occurrences were satisfying and well-earned. Some were explained away by exposition. The entire episode was jumpy and strangely timed. And yet, as "Blade Man" has always managed to do, the final episode ended on a feel-good note.

At the drama's start, "Blade Man" was quirky, fast-paced, fun, and full of relevant and interesting issues to be solved. Hong-bin had major anger issues that manifested in deadly blades sprouting from his body, and a son who needed caring for. Se-dong had  a serious care-giver complex that left no room for caring for herself. Daddy Joo let his pride come between him and his family. Even Madam Yoon was consumed by her need to please Daddy Joo and allowed that to guide her life full of horrible decisions. All of these issues are wonderful. They require the character to receive external help, do some major reflection, and ultimately come to terms with themselves. They all did this, but their paths were a strange mixture between logical, illogical, and unsatisfying. Minor characters were brought in when they were needed, and excluded when they weren't. It made for very choppy story-telling.

Let's begin with Hong-bin. His character made the most progress and grew most over the course of the drama. He learned to connect with his son with a little help from Se-dong and Secretary Go. He learned to control his anger and say that he was sorry. What he did not learn was how his blades came to be. The show made a connection to a story he wrote as a child, but that explanation came in the eleventh hour. At a certain point the blades stopped manifesting, the characters stopped worrying about them, and Hong-bin's heightened abilities only showed up when they were useful to the plot. The transformation no longer was an issue he had to contend with and that felt like the bottom dropped out of his character. He didn't have to constantly fight with the physical manifestation of his anger issues, only with his anger. It was an incongruent shift. Se-dong's knowledge of his abilities was also never made clear. The writers chose to exclude her from Hong-bin's personal battle with his abilities, which was a very strange path to take. As the person who helped him most, it would've been most logical for her to be included. However, when he flies away with her in the last scene, it can be assumed she knows. But I hate assumptions.

His newfound fatherhood was very well handled around the middle of drama when he finally attempted to relate to his son, but near the end the show neglected to give his fatherhood screen time. It's a major oversight. Fatherhood is what helps Hong-bin change. It helps him understand his own father. Chang had a huge role in his life and in Se-dong's life, and the child was extricated from all proceedings past the mid-drama mark. He was not integral to the drama in the later half. His relationship with Se-dong disappeared. It was such a shocking change from the close-knit relationship they had earlier in the drama - it is not something that would normally change that drastically.

The inclusion of a living Tae-hee into "Blade Man" was its downfall. Her appearance was meant to shake Hong-bin's and Se-dong's romance - nothing more. The son she abandoned's reaction, Chang's reaction, to her was excluded. Beyond one episode, her parents' reaction to her was excluded. Her decision-making had very little rational behind it. She was a very haphazard character. Each time I thought that they used her for solid development in a character or in herself, the next episode would prove me wrong. Tae-hee is the epitome of noble idiocy. It seemed as though her character's purpose was to shake the romance and teach the lovebirds not to repeat her idiocy. It didn't. She also declared often that she did everything as a mother, but her major focus was on Hong-bin, the man she loved. She barely focused on Chang. But this was a trend of the show. To use Chang only to instigate change and leave his development by the wayside. He was used to inspire major change in Daddy Joo and then the relationship between Daddy Joo and Chang was dropped, like every other relationship Chang was in.

Daddy Joo's pathway was one of the highlights of the show. It paralleled Hong-bin's in how slowly they both learned to release their pride and anger and open up. Developing a relationship with Chang was the start of it. Se-dong's role in his life continued it. We got to watch Daddy Joo struggle with his demons that haunted each aspect of his life. He slowly learned to make amends. It was so satisfying to watch him battle with himself and win. Although Hong-bin had similar struggles, his noble idiocy regarding Tae-hee and the issues with his blades detracted from it.

A character I can't understand is Madam Yoon. By the end of the drama it is clear that she is motivated by a perverse love that she feels for Daddy Joo. It drove her to do horrible things to Tae-hee, as well as lying, sneaking around, and manipulating Hong-bin's family. She received no retribution at the end save for a broken heart, which she already had. She was the most ineffective villain. Hong-bin's anger issues were more effective villains than she.  Hong-bin came to terms with them by recognizing he had anger issues and apologizing to those he'd hurt, including the puzzling Madam Yoon. But Yoon herself, well she didn't learn much of anything. She continued to lie until the end. She omitted the truth of what she'd done. She received no comeuppance and that left a sour taste in my mouth. I would've loved to have seen what Hong-bin would do at this point in his life when he learns of Yoon's transgressions. It would not be the violent temper tantrums of yore that we'd see.

There were many quirky camera techniques that made the beginning of the drama fun, like too much time focused on one face, or switching between two characters too often. It made for good comedy. But near the end when applied to exasperating characters, the techniques lost their effectiveness. What did not lose effectiveness was the lovely music. I applaud who wrote and scored it because it really soothed over many transgressions of the show.

As for Lee Dong-wook and Shin Se-kyeong's acting, it seemed to fall into mediocrity in the middle of the drama when the plot became choppy. Lee especially began to overact, perhaps because he wasn't aided by the blades that magically stopped appearing. In the quiet moments, he excels. All the grimacing and over-the-top motion is wiped away and we're left with raw emotion. A similar thing happens with Shin. In this last episode she had a very quiet moment of anger, self-pity, and realization and Shin pulled it off beautifully. She is normally quite bland of affect, but in this scene she was expressive. I wanted more of that from her throughout the show. Han Jung-soo and Kim Gap-soo were the two who really had nuance in every scene they were in. Despite the fact that Han only played a quirky secretary, he made Secretary Go lovable and full of life. Kim made a seamless transition through all of the stages Daddy Joo traveled through on his road to realization. Lee and Shin's characters were victims of choppy writing and, dare I say it, mediocre acting when the plot got rough.
One of my favorite moments of the ending was when Daddy Joo shows Hong-bin why fractions are flipped, years after he blew off his son. Walls came down, and it was beautiful. There was nothing special about the scene save for the gentleness in Kim Gap-soo's acting, the connection he had with Lee Dong-wook, and the eternal bond between father and son. It was great. I wanted more of that quality of scene.

Had I not been reviewing "Blade Man", I think it would've been much more fun. But looking at it with a critical eye poked holes in the paper thin plot. When it was fun, "Blade Man" was truly fun. It had humor, and heart, and despair. The cast had good chemistry. The show just suffered from a severe lack of follow-through. But for a nice day of playing couch potato with a bowl of popcorn, "Blade Man" is perfect.