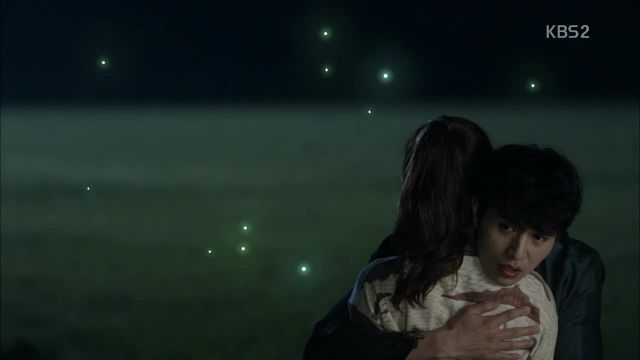 "Blade Man" is still cute as ever, but this episode came to almost a complete standstill in terms of plot development. Some background on Hong-bin and Tae-hee's relationship as well as on Hong-bin's selfish, conniving father made its way to the fore, but it was surrounded by fluff and a good bit of overacting.

The point of all the fluff was most definitely to bring Hong-bin and Se-dong closer, to use her kindness as the instigator for change in the gruff, literally prickly man. It worked. Hong-bin changed and he finds himself drawn to Se-dong's free spirit, but it was a inefficient use of time in terms of drama production and a limited amount of time to tell an effective story. So much time was spent on Se-dong's good deeds that they began to drag on. They were only interesting when Hong-bin was directly reacting from them and (reluctantly) participating in the good deeds himself.

The episode mostly took place in the countryside where Tae-hee, Hong-bin's dead love, grew up. The show took the time to explain how cruel Hong-bin's father was to Tae-hee before she died and how that cruelty hurt her parents. Lee Dong-wook's acting was much more subdued and effective in this episode, mostly because he had to react to all the information that he learned from Tae-hee's parents. Shin Se-kyung, on the other hand, was quite over-the-top with her acting, especially when she was acting alone. When working with another actor, she is much more natural.

Outside of the countryside, Madame Yoon reveals herself as a threat to Hong-bin. She was once his father's lover and bore him a son. She is using that to stake claim on Hong-bin's home. An ambitious mistress is nothing new to K-drama, but Lee Mi-sook plays her with depth and finesse. This development could be annoying, or it could be cleverly used, especially since Hong-bin's father is a very selfish man who has hurt many people. Having Madame Yoon seek retribution might be what he needs to change.

As for the mystery of Hong-bin's transformations, it has revealed itself further. Hong-bin is now aware that he is possessed of unusual appendages. That is a big step because now he will actively pursue the answers to what they are and why they appear. Perhaps now he and his dim, but physically adept, Assistant Go can collaborate in order to seek the truth.