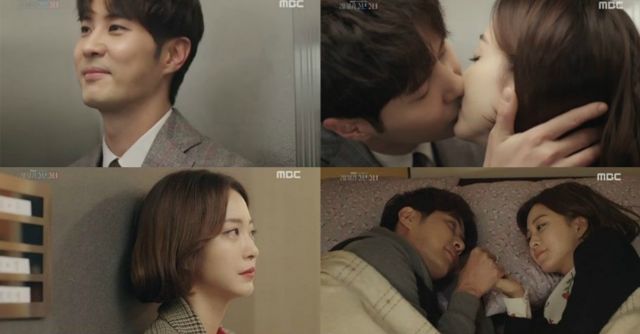 Ho-seong (played by Kim Jung-hwa) is Jin-jin's estranged sister, and apparently the artist behind all those pictures for whom Jin-jin has been looking for a source. Ho-seong's character is another case where I've been left wondering, has there ever been any mention that Jin-jin had a sister until literally the moment she appears? Because I certainly can't remember any, which is odd considering that finding her sister is the closest thing Jin-jin has had to ongoing motivation.

It also gives some urgency to the whole matter of their mother needing eye surgery, which up until now had seemed like a very unnecessarily overdramatic storyline. But then again Mi-kyeong has been deliberately hiding this information from Jin-jin, so it's not like this would be relevant context for Jin-jin's search. Ji-won is the guy who has to set everything in order, since of all the characters, he is the one with the most complete information.

Shoot, forget the characters, Ji-won knows more than even I do, since in addition to knowing that Jin-jin had a sister, he's also the only one who knows anything about So-ni. Incidentally, So-ni remains a cipher. It's not clear whether the overtures he makes toward quitting the entertainment industry are made of humility or misguided nobility. Bear in mind that since we don't really know what So-ni's job actually is, it's a little difficult to tell whether or not he's any good at it.

"Boy and Girl From the 20th Century" overall is just these little fragments. There's never enough context for the more serious scenes to have any dramatic impact. Moreover, the few situations the main characters do get into are so similar to one another there's surprisingly little variety in the outcomes. So Jin-jin and Ji-won look cute when they're together in a lovey-dovey manner. Pleasant as those scenes are, they're not really much to hang an entire narrative story on.

This is especially true since there's surprisingly little difference in character interactions before or after their getting together as a couple. I always thought that Ah-reum and Woo-seong were acting like they were dating even when they were not, and now that they're actually a couple, that behavior is unchanged plus or minus a kiss. The scene where Ah-reum's mom interrogates her about the new boyfriend is the main interesting twist we've gotten there lately- but as is the cases with most of the interesting scenes in this drama, it frustratingly ends far too quickly.

"[HanCinema's Drama Review] "Boy and Girl From the 20th Century" Episodes 27-28"
by HanCinema is licensed under a Creative Commons Attribution-Share Alike 3.0 Unported License.