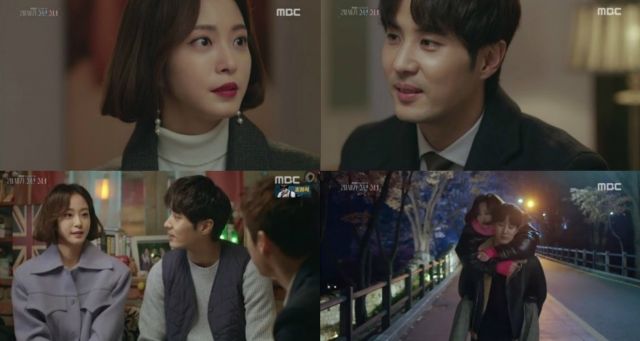 Credit given where it's due, the opening scene, with its epic kiss and then fade into the elevator scene where we last saw Jin-jin and Ji-won together was pretty good. I rather missed the young versions of those characters. Unfortunately the conclusion of the elevator scene is the last we see of them, and apparently their entire relationship. Jin-jin's parents inviting Ji-won to family dinners takes on a very different tone now that we know Chang-won and Ji-won's first encounter was a violent one.

It's a testament to how pointless "Boy and Girl From the 20th Century" is that the entire series since we last saw young Jin-jin and young Ji-won could have been condensed into a couple of episodes, then we could have seen the conclusion of the elevator scene, and the story as a whole would have flowed much much better. Remember how Yeong-sim's father was abusive? Serious talk between Yeong-sim and her mom about filing for divorce would have had a much stronger impact if we had seen that more recently.

But then again I thought that plotline was resolved, kind of, when Yeong-sim decided that her father was a nice guy after all, albeit a mean one. For a drama with no story, "Boy and Girl From the 20th Century" has this very bad habit of trying to finish its subplots as quickly as possible. The scene with Woo-seong's sisters in particular is given almost no room to breathe, which is a shame because the set-up had really good comedic timing.

Other good comedic timing is had when Yeong-sim brings Kyeong-seok to hang out with the rest of the gang and we actually get to see the guy unwind. Kyeong-seok's more outgoing state is also helpful in that he asks direct obvious questions which the main characters are apparently unwilling to ask themselves. It was funny how Jin-jin gets mad at Ji-won for being shy about liking her, the woman apparently having forgotten that their entire relationship is a secret solely for the benefit of her career.

Speaking of Jin-jin's career, episode thirty is completely devoted to some historical drama that can't possibly have a pay-off since "Boy and Girl From the 20th Century" is almost over. The best thing to come from that was the falling leaves fight scene, which looks ridiculous mainly because there aren't any trees around. I'm not sure whether that was actually supposed to be a joke or not.

"[HanCinema's Drama Review] "Boy and Girl From the 20th Century" Episodes 29-30"
by HanCinema is licensed under a Creative Commons Attribution-Share Alike 3.0 Unported License.