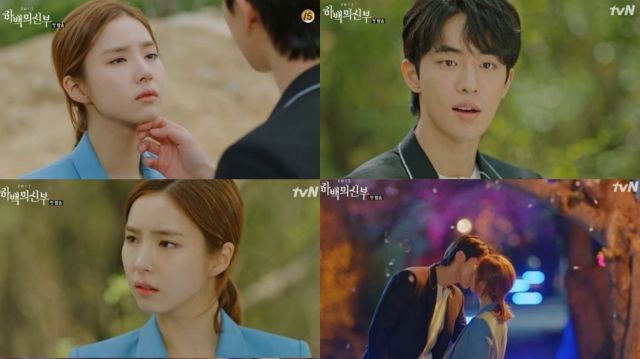 Right away "Bride of the Water God 2017" gets the essentials out of the way by clearly explaining its high concept fantasy plot. Every so often one of the natural god kings has to obtain the necessary artifacts in order to become emperor. This time, the aspiring god king is Ha-baek (played by Nam Joo-hyuk), who tends to spend a lot of time lying around and being sexy while not actually doing anything all that useful. Things do not go well when he has to go the human world to acquire the artifacts.

Meanwhile, So-ah (played by Shin Se-kyung) is a woman in the human world who works as a pscyhiatrist. It's deameaning work with crazy people that apparently doesn't even pay all that well because So-ah is in chronically hopeless debt. So right away we get this important idea that Ha-baek and So-ah both have dignity, yet are constantly being forced to lose it because it turns out that making it big in the human world requires more than ambition and loudness alone.

This is particularly well demonstrated by their idiot sidekicks. Ha-baek has his retainer Soo-ri (played by Park Kyu-sun), and So-ah has her assistant nurse Sang-yoo (played by Shin Jae-hoon). To add insult to injury, said idiot sidekicks actually appear to be smarter than either of the people they're supposed to be helping. Soo-ri actually studied the rules involving the artifacts, and Sang-yoo has a better grasp of So-ah's finances than So-ah herself does. They do manage to look more stupid than the actual leads do, though. Most of the time.

That's my main overall impression of "Bride of the Water God 2017"- all of the characters are really dumb. Still, they're more charming than that uncharitable description would lead you to believe. The main issue with Ha-baek and So-ah is that they are constantly in denial about just how bad their overall situation is. By the time we get to the climax, where they're being chased by something...rather undignified, it seems like they may perhaps finally be getting some inkling about what they're in for.

I'm not feeling much in the romance department just yet, but it's reassuring that the leads are flawed and annoying in such obviously telegraphed ways. This offers plenty of room for improvement, although as of the end of the first episode, So-ah still doesn't believe Ha-baek is a god and Ha-baek doesn't have any real leverage to force her cooperation. Well, I'm willing to see what happens next at any rate.