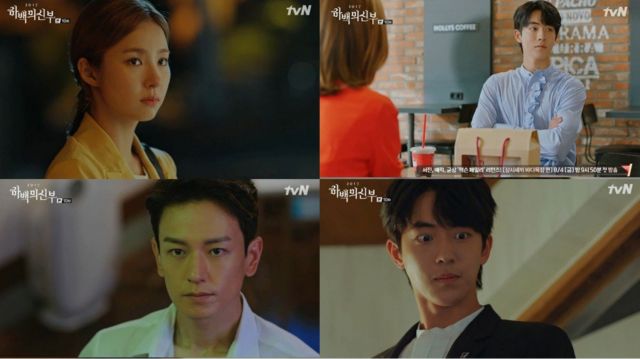 In a turnabout I can only describe as perplexing, not only does the amnesiac monk issue solve itself without Ha-baek's input, it also results in Ha-baek simply being given one of the artifacts. No effort appears to be required on Ha-baek's part for anything, which kind of begs the question of why he had to go the human world in the first place. The early episodes especially have the impression that Ha-baek was going to have to earn leadership by completing difficult tasks, possibly without being able to fall back on his godly abilities.

Instead, Ha-baek dithers on the question of going back home. We are to believe that this dramatic hesitation is a consequence of Ha-baek's romance with So-ah. That might actually be believable if So-ah had any redeemable qualities, or if Ha-baek and So-ah worked well together, or if Nam Joo-hyuk and Shin Se-kyung had any decent chemistry. But without these factors, "Bride of the Water God 2017" continues to feel pointless.

It also feels weird, in its odder moments. Some questionable editing gives the impression that one character is being assaulted through a magical sandbag, until better context reveals that the person in question is actually being attacked by minor gods working on commission. Wait, there are minor gods in this universe? How many gods are there? Where are they all? Could the guy rambling about Obama in the early episodes maybe have not been crazy after all?

So-ah specializing in psychiatric care seems a wasted opportunity, given this context. I could easily see her getting into the field because, as someone who knows gods are real, she also knows they are frequently mistaken for mental patients. Well, all right, I guess this worldbuilding doesn't really work either, since gods who are willing and able to use their powers for personal benefit can't be easily cowed by humans with no leverage.

Well, except for the no killing humans rule. I guess that's kind of leverage- but is that an actual magical rule with consequences for being disobeyed or just something informal? That's yet another important plot point left unclarified, even as the dialog remains dominated with discussions of grudges, conversations, and action scenes which are simply narrated to us. "Bride of the Water God 2017" is what happens when a story is all tell and no show. It's a fantasy romance drama with no fantasy and barely any romance, but plenty of gratutitous discussion of real estate business and legal contractual obligations.