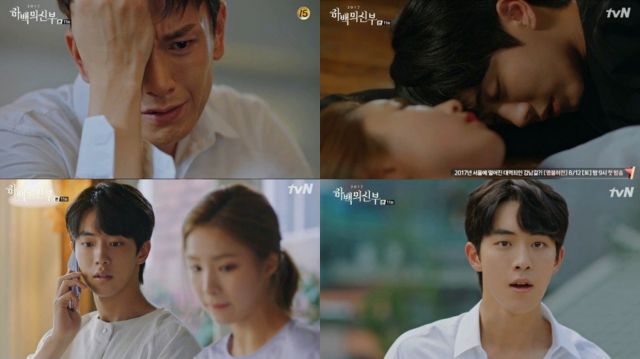 In the opening scene Hoo-ye reacts poorly to being incidentally fondled by So-ah and Ha-baek reacts poorly to Hoo-ye reacting poorly to being incidentally fondled by So-ah. This ends up defining their characters arcs for the rest of the episode, which mostly to boils down to angst. Oh no, thinks Ha-baek, I was mean and now So-ah hates me. Oh no, thinks Hoo-ye, I murdered all those people a long time ago. Maybe So-ah will understand because-

Wait what? Why would So-ah understand? And that was basically my reaction to most of the exposition in "Bride of the Water God 2017", wherein characters make outrageous statements based on assumptions known only to them, and whoever they're talking to is forced to react in perplexed confusion. The cliffhanger is the best example of this to date, since Moo-ra's baffling utterance implies that So-ah wanted to work as Ha-baek's mortal guide, when the first several episodes were all about her failed attempts to reject this role.

Considering what little contribution So-ah has made to Ha-baek's overall goals, it's not clear why Ha-baek needed a mortal guide in the first place. Now, again, in the early episodes it was implied that existence of a mortal guide was an important part of the gods' royal ascension process, and that they existed mainly for this reason. So this new turn of events isn't really a contradiction in continuity. It only seems that way because all of the exposition in "Bride of the Water God 2017" is really, really vague.

As are the jokes, which are similarly almost always just the confused reaction of some characters to the non sequitur statements of other characters. The one with the blow-up doll was what really lost me, although the prospect of getting godly powers from a kiss also ranks up there. And let's not forget So-ah appearing in Yeom-mi's dream. Was this Yeom-mi being eccentric or does So-ah actually have magic dream powers?

In all fairness there is a lot of talk about the relationship between Ha-baek and So-ah, which is mostly discussed through the weird plot device of making Ha-baek drunk. Although yeah, come to think of it, even there it feels like writer Jeong Yoon-jeong was just picking story ideas out of a hat at random. "Bride of the Water God 2017" is a situation comedy designed as a supernatural romance, where magic cell phone powers are the closest we get to reminders of the central characters' godly natures.