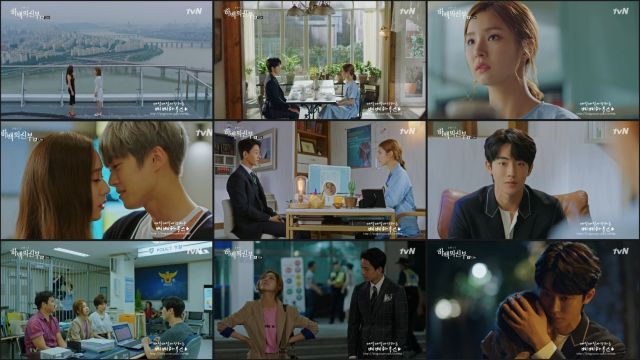 The extended opening is Moo-ra narrating to So-ah the story of how So-ah's ancestors came to be servants of the gods. So-ah's reaction to the story mirrored my own, which is to say, she has trouble understanding how any of this is relevant to the current situation. Mostly I'm kind of in awe about how So-ah's ancestor was able to negotiate his way out of the predicament so easily. Although then again, why the guy was in danger seems a bit underexplained, considering he didn't actually do anything to warrant dealmaking in the first place.

Not that any of this matters, because ultimately, the point Moo-ra somehow makes to So-ah is that because of this tragic story, she must not prevent Ha-baek from going back to the godly realm. Because uh, he'll get hurt again emotionally. I guess. I was hoping "Bride of the Water God 2017" could come up with a more compelling conflict than that to keep Ha-baek and So-ah apart, but it really does just seem to boil down to Ha-baek's sense of self-esteem.

Which Moo-ra cares about because..? There I don't have an answer either. Considering how Moo-ra doesn't even live in the godly realm it's not clear to me why it matters to her whether Ha-baek ascends to his rightful place or not. Does she need Ha-baek to ascend in order to return herself? Or does Moo-ra get subsidiary power if Ha-baek gets ultimate power?

"Bride of the Water God 2017" does not feel the need to answer any of these questions, since instead Moo-ra spends her off-time engaging in romantic banter with Bi-ryeom. Wait, wasn't she hanging out with Bi-ryeom solely to prevent him from trying to murder Hoo-ye? Did Moo-ra stop caring about that, or did Bi-ryeom stop caring about killing Hoo-ye? It is, once again, unclear what the correct answer is because these motives were so underexplained in the first place it's hard to tell what anyone actually wants.

I've really been sturggling with trying to understand what "Bride of the Water God 2017" is even fundamentally about for a long time now. We're at the point that there's an entire subplot about that annoying woman who confronted Hoo-ye over the flowers getting her own love interest. You know, the one involved in the real estate deal who...why does this drama have a real estate deal subplot? Why is So-ah playing with children? Why are we supposed to care?