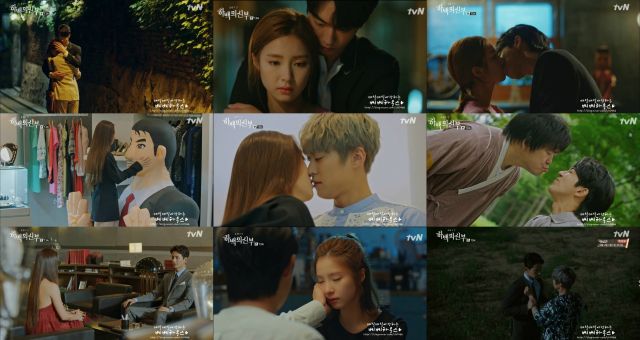 Ha-baek completed his goal, so now he must come back with a new, arbitrary, and mostly made-up goal so he can hang out with So-ah some more. So it is that "Bride of the Water God 2017" has once again found an excuse to clog up almost all the runtime with yet more pointless exposition, and almost no commensurate action built upon said exposition.

Here's an example. While there is endless talk about Ha-baek getting a car and driving somewhere, when he does finally get into the car and starts driving somewhere, the trip is cut short and we then go back So-ah's place where further discussion is then had about where Ha-baek should drive when it's time to get serious. This is the entire drama, is just people talking about doing stuff that they never get around to actually doing.

And on the rare occasion something actually happens, big surprise, it turns out that none of the random conversations about nothing that we had been watching have anything to do with what's happening. I refer, of course, to the long-awaited fight between Hoo-ye and Bi-ryeom. This fight is made especially frustrating by the fact that at one point, a character asks for some explanation as to why Bi-ryeom has this insane hatred of Hoo-ye, and is intentionally given a brief and unsatisfying answer, so that we may be surprised when the drama finally gets around to explaining what exactly Bi-ryeom's problem is.

But let's ruminate on more of the "literally nothing is happening" plots for a moment. Observe the ridiculous energy Moo-ra dedicates to trying to break Ha-baek and So-ah up. Nothing comes of this. They just have normal cute romantic conversations like normal. Not that these conversations are that cute. Honestly I'd be more forgiving of the faults in "Bride of the Water God 2017" if the leads at leads had halfway decent chemistry.

The cast here is really just not very good. Krystal can't seem to decide on a scene-by-scene basis whether Moo-ra likes Bi-ryeom or not, so their scenes are always this creepy middle ground between being rapey and flirtatious. Also, what is with her job? Aren't actresses usually under contract, precisely to prevent them from having a temper tantrum and refusing to film? You'd think a drama production team would be able to get that much accurate, but "Bride of the Water God 2017" really is just that bad all around.