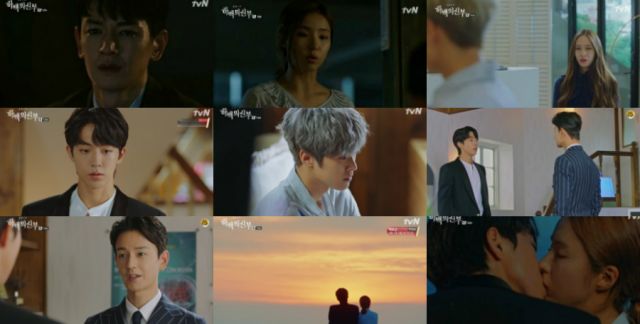 Now we finally have it- the story behind what horrible crime Hoo-ye committed that makes everyone hate him. Unfortunately we've been waiting so long for this moment that the revelation largely comes off as a dud, and the entire crisis mainly a result of the various supernatural nations refusing to communicate with each other for no good reason. Mostly I just continue to feel sorry for Hoo-ye, who at least has an excuse for being maladjusted, unlike most of the characters in this drama.

And in another usual bit of irony, it turns out that So-ah also mostly continues to have pity for Hoo-ye, for the exact same reasons. On one end, it's nice that So-ah is finally acting in such a way that it's easy to empathize with her as a perspective character. But uh, that empathy is mostly borne out of how both she and we have been kept out of the loop on most of plot for no good reason.

I do have to admit that Ha-baek's retort of "well you didn't ask" is completely true. While this is, in general, a stupid cop-out, it does seem weird in retrospect that So-ah saw Ha-baek get really mad at Hoo-ye for completely unexplained reasons, and did not inquire into the matter further, losing interest once the two men were no longer in the same room. I write that, yet I didn't really care much at the time either.

Nor do I now, because the Hoo-ye storyline has nothing to do with the main plot. Resolving the Hoo-ye situation was not necessary to get the artifacts. It's also not necessary for Ha-baek's currently explicitly contrived objective to find out why the artifacts were in the human world in the first place. Nor does Hoo-ye's story contain any relevant information to these stories. At best, it just lets us know that the gods are jerks, and we already knew that.

All it does is sort of make Hoo-ye sympathetic as an alternate love interest. Bear in mind, pity is not exactly a sentiment that sets the heart aflutter, and I'm doubtful Hoo-ye could eventually gain So-ah's heart even given his obvious advantage over Ha-baek. Then again, that's mostly a function of my not understanding why anyone wants to be together with So-ah at all. In her best moments So-ah is merely kind of nice- does that alone really warrant serious long-term sacrifice on Ha-baek's part?