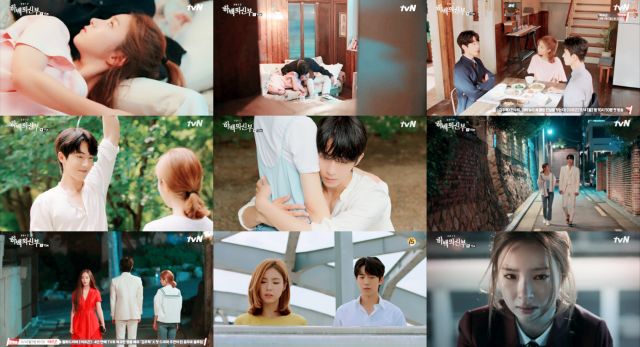 So Ha-baek and So-ah have finally gone off on their big car trip, and the purpose of it was to...have So-ah dish about her emotional problems relating to feelings of abandonment by her father. This much I can actually work with. It's a legitimately sad, emotional story, and I can easily see this being the final step of intimacy to be consumnated in a romantic drama, so it's all very appropriate for the penultimate episode. There's just one problem. So-ah's parental issues have never been a part of the conflict.

I mean, yes, they have been referenced before. Writer Jeong Yoon-jeong didn't just grab this storyline out of nowhere. But in context So-ah's backstory has only ever been used as a weak excuse to justify her generally mean and antisocial behavior. So for the last several episodes it hasn't been brought up at all, since the production team realized that So-ah has to act sympathetically somehow in order for us to even want her and Ha-baek to be together in the first place.

Most of the plot here is curiously uninterested in backstory from the last several episodes. There's an entire extended sequence where Ha-baek and Hoo-ye just work together to plant...trees. I feel bad Lim Ju-hwan. He knows that Hoo-ye is supposed to be coming on to Ha-baek somehow, but there just isn't enough of a relationship between these two characters for there to be any emotions worth acting.

Nam Joo-hyuk has always had the same issue when it comes to Ha-baek's feelings for So-ah. Arrogant jerk Ha-baek may not have always been all that pleasant, but he at least had a consistently defined character with clearly delineated negative personality traits. Romantic Ha-baek is just too fluffy and cute. Even his attempts at meanness just come as harmless, which is weird considering we have seen him make entirely sincere threats against other characters.

Rounding out the trifecta of luckless actors is Gong Myung, who has to alternate between murderous psychopath and rude love interest entirely arbitrarily based on whatever tone the scene in the script has been set to. It's actually Yeom-mi, of all people, who does important plot stuff here, as we find out her prophetic dreams are real, and not just a weird pointless joke. That much clarifies that it's not any long-term goal that will matter in the final episode, but yet another random plot point from nowhere.