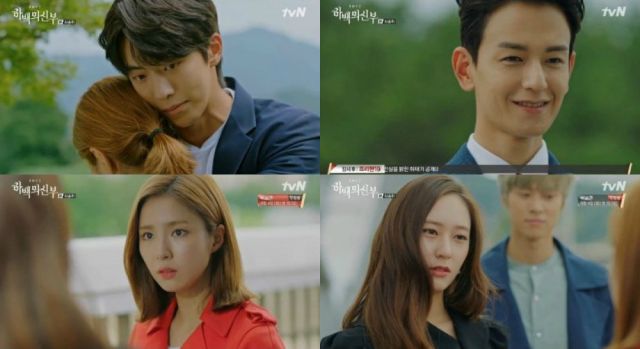 Further exposition about So-ah's father closes out "Bride of the Water God 2017", and it's just so strange to take in. It's not that this storyline is particularly unusual or anything, it's that I can't quite recall ever having seen another drama that was so obsessed with exposition rather than payoff. The conflicts in "Bride of the Water God 2017" quite literally are solved the minute they are fully exposited, with only minimal effort being made by the actual characters to actually resolve these problems.

This chronically begs the question of why anyone ever bothers fighting each other about anything in the first place, since this exposition is only ever for our benefit. Take the ongoing feud between Bi-ryeom and Hoo-ye. Bi-ryeom always knew what that argument was about, and Hoo-ye had a pretty good guess, even if he was lacking in specifics. So why did Bi-ryeom stop caring just because...I don't know, Hoo-ye expressed remorse? Someone asked him to stop? I can't remember if this was ever actually addressed.

I can remember that until So-ah started talking about her father the indications that his disappearance negatively affected her were ambiguous at best. In general So-ah started the drama off as angry, and became less angry as the story went on. While this does track with her developing a romantic relationship with Ha-baek, I can't think of anything they actually did together to have an effect on each other's personalities.

Like, Ha-baek was always a fundamentally selfish and arrogant dude. But it was never all that clear why this was such a black mark against his character when the guy has no apparent responsibilities. While Moo-ra talked all the time about how bad it would be if Ha-baek did not become emperor, the negative consequences of such a choice were never actually explained. The position of emperor involves a lot of people who aren't Ha-baek doing paperwork, and that's about all I could figure out about it.

The lack of conflict is made all the more galling by how the closing sequence involves a deus ex machina, when there is not actually any plot that requires the intervention of a random god to solve. There are, after all, other random irrelevant plot devices that can apparently achieve the same task. Even the romantic subplots underhwelm, with the only confirmed alternate pairing involving, of all people, a random cameo. Right to the very end, "Bride of the Water God 2017" is just a lot of nothing.